The untold story of dance’s forgotten diva. A play with music & dance. 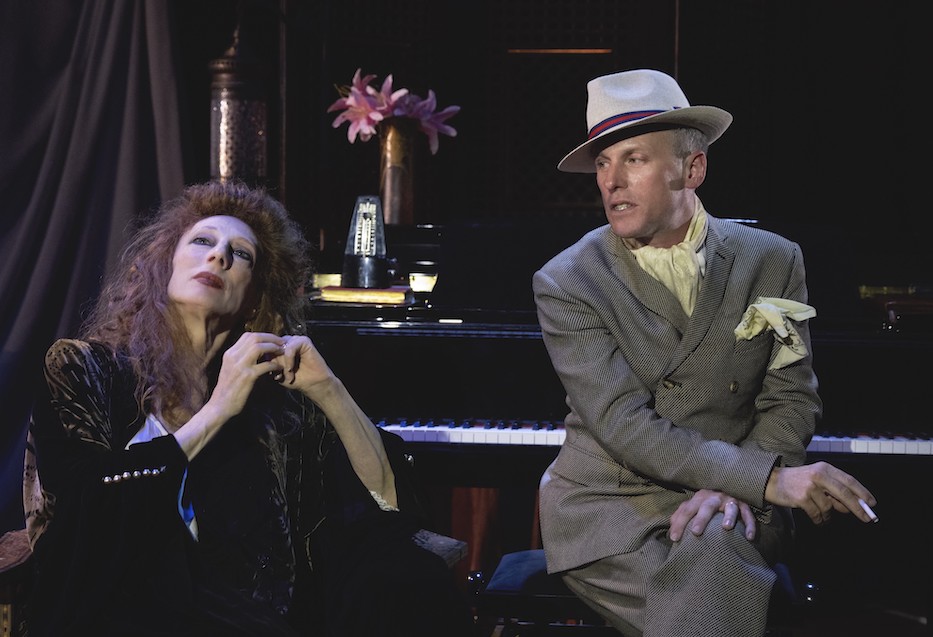 The full cast are Darren Berry as Ravel, Marco Gambino as D'Annuzio, Naomi Sorkin as Ida Rubinstein, Max Wilson as Edward Clement, and Kathryn Worth as Sorreto/Romaine Brooks.

Ida Rubinstein: The Final Act tells the untold story of dance's forgotten diva, the early 20th-Century Russian impresario, performer, and femme fatale. From Paris to Palestine, from dancing with the Ballets Russes to commissioning Ravel’s Boléro, Ida Rubinstein’s career as a dancer and impresario saw her working with artists such as Stravinsky, Nijinsky, and Debussy. But despite her varied career and fame in her own time, her name is all but forgotten, whilst her contemporaries live on in memory.

Now Naomi Sorkin, actor and former ballerina with American Ballet Theatre, recounts the Russian heiress’ dramatic life: her scandalous Salomé that lead her embarrassed family to commit her to an asylum, her rise to the heights of fame in Paris, her bisexual love affairs, the assassination of her long-time lover Lord Moyne, and her selfless devotion to wounded soldiers in both World Wars.

Naomi Sorkin (Ida Rubinstein) was one of America’s leading classical and dramatic ballerinas. She began her career at 14, dancing with the Chicago Lyric Opera, joined American Ballet Theatre at 17, where she rose quickly through the ranks to become a principal artist, there as well as with both the Eliot Feld company and the San Francisco Ballet. She became known for her varied repertoire, which spanned dramatic, classical, lyrical, and contemporary dance. Her dramatic power and lyricism, combined with a strong classical technique made her a favourite with choreographers worldwide such as William Forsythe and Lindsay Kemp.

In her parallel career as an actress, Henryk Baranowski, twice winner of Russia’s Golden Mask award adapted _The Idiot_ for Naomi to play Nastyasia Filippovna in London at the Riverside Studios, as well as creating the role of The Black Angel for her in his Macbeth in Poland. She inspired and starred in Madame Ida, which was shown at the V&A, London Short Film Festival as well as in Paris, Capri, Brescia, and St Petersburg, where it resides permanently in the collection of the Theatre Museum of St Petersburg. She also starred in Roman Fever, based on the Edith Wharton short story of the same name, which screened at Riverside Studios and the Aesthetica Film Festival.

Darren Berry (Ravel) is a multi-instrumentalist and vocalist, session musician, musical director, orchestral arranger, and composer. His work includes the HBO series Art-land, Channel 4’s The Turner Prize, along with installations at the Tate Modern and winning a Grammy for the eponymously titled La Roux album.

Marco Gambino (D'Annuzio) is an Italian actor who has been working extensively in the UK and abroad. Marco has appeared in some of the most popular Italian and British television series including Young Montalbano, Emmerdale, The Boss of the Bosses, Squadra antimafia, and Romolo and Giuly. Films include The International and il Traditore. Marco is also known for his monologues which he interprets in more than one language: Words of Honour, Othello’s Guilt, and Maria Callas the Black pearl.

Christian Holder (Director and Choreographer) has had several theatrical careers, from being a child actor/dancer in London, to a principal dancer with The Joffrey Ballet in New York, to costume designer and choreographer, and most recently, as a solo cabaret vocalist. He has worked with choreographers Jerome Robbins, Agnes de Mille, and Leonid Massine. Ida Rubinstein: The Final Act marks Christian's debut as playwright and director in London.

Declan Randall (Lighting Designer) is an award-winning lighting designer. Declan has over 500 design credits to his name, including: Pride & Prejudice at Beijing Poly Theatre; The Glass Piano at The Print Room at The Coronet Theatre; A Dance of Decadence The Little Orchestra; Hadal Zone all at the National Centre for Circus Arts; Henry V, Othello, Macbeth, Richard III all for the Guildford Shakespeare Company; Bugsy Malone, Animalcolm, Merrily We Roll Along Yvonne Arnaud, Guildford; Sister Act, Full Moon Nelson Mandela Theatre; Man of Steal all at the Menier Chocolate Factory.