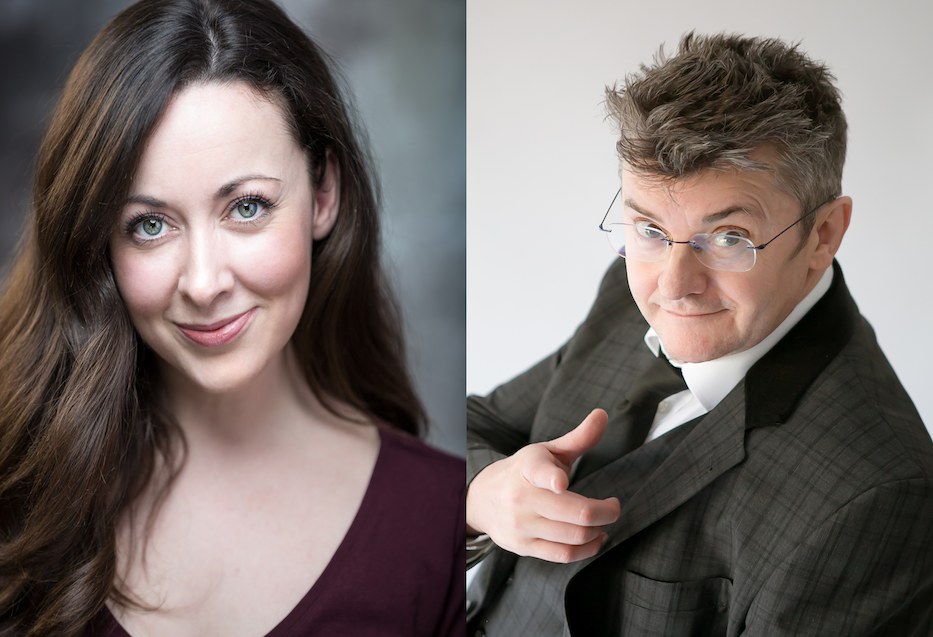 The producers of John Godber’s classic comedy, April in Paris, are delighted to announce new and rescheduled dates for the National tour, which will now open in Coventry on 17 May 2021. April in Paris will star Joe Pasquale and Sarah Earnshaw as Al and Bet and will be directed by Richard Lewis.  Audiences will be socially distanced.

In John Godber’s touching and hilarious classic, we go into the heart of one ordinary couple’s life as they go on both the journey of a lifetime and a journey into their relationship.  Al and Bet are in a rut.  Married for 26 years, their conversations are running dry and life has taken its toll. With his building work sparse and her shifts at the shoe shop getting few and far between there’s little to look forward to, apart from a possible ABBA tribute show in Wakefield and the odd trip to the pub.  But Bet has dreams.  She longs to walk with the Pharaohs in Egypt, sunbathe on golden beaches and climb Alpine mountains, all fuelled by her love of magazine competitions with holidays as prizes.  Finally, her luck changes; she wins a night away for two to Paris in April, via a luxury trip on P&O Ferries out of Hull.

Joe Pasquale said, “I have been a huge fan of John Godber's work for the past 30 years since I first saw Bouncers, so to be given a chance to perform this specially adapted version of one of John’s finest creations is a dream come true. To be able to perform this show with Sarah Earnshaw is a true delight. John has written a masterclass of comedy and pathos, with such a sense of realism, reflecting the way life is in a long relationship.

“This is probably the longest rehearsed ‘two hander’ play in history; I’ve already grown four cauliflowers and a crop of onions since we started! We have been working on it since last September, in the hope of theatres reopening in the autumn of last year, but, sadly, we kept getting pushed back and finding doors shutting on us just as we were ready to perform it. So we continued to rehearse and hone it, ready for the green light and I’m very excited to say that, on 17 May, we will be the first touring theatre show out of the gate. What a remarkable achievement from all the team to make this happen. I can’t wait for audiences to come out again, remember what live entertainment means to all of us and how much we need it; performers and audiences alike.... I promise we won’t forget our lines!”

Producer and director, Richard Lewis said, “I’m delighted to finally be able to present April in Paris! This is all the more delightful as, not only is it a funny, uplifting comedy just right for the times, it also premieres on the first day that theatre is allowed to perform in the UK again.  The production has been specially designed and rehearsed to cater for a socially distanced audience and the performance will represent a milestone in the theatre industry’s rejuvenation. I hope audiences will support a bold initiative to get theatre back where it belongs – in front of an audience – whilst supporting their local theatre and having a good laugh while they are doing it!”

Joe Pasquale and Sarah Earnshaw had begun the second UK tour of Some Mother’s Do ‘Ave ‘Em when theatres were closed by the Government because of the Covid-19 pandemic in March 2020.

Comedian Joe Pasquale has delighted audiences with his live stand-up tours for over 30 years. Along the way he’s voiced characters for Hollywood movies Garfield: A Tale of Two Kittens and Horton Hears a Who!, children’s television animation Frankenstein’s Cat and starred in The Muppets’ 25th Anniversary Show. Joe made his theatrical debut in 1999 in Larry Shue’s The Nerd, followed by the touring productions of Tom Stoppard’s Rosencrantz and Guildenstern Are Dead and Mel Brooks’s The Producers. In addition, Joe took part recently in ITV1’s The All New Monty: Who Bares Wins, he was crowned ‘King of the Jungle’ in ITV’s I’m A Celebrity…Get Me Out Of Here in 2004, appeared on five Royal Variety Performances, hosted his own ITV special An Audience with Joe Pasquale, at times hosted The Paul O’Grady Show for Channel 4 and hosted the long-running television series The Price is Right for ITV.  Other recent TV credits include a celebrity edition of Total Wipeout; Guinness World Records Smashed and Virgin One’s The Prisoner X.

Prior to playing Betty, Frank’s long-suffering wife in Some Mothers Do ‘Ave ‘Em, Sarah Earnshaw most recently starred as Connie in The Nightingales (Theatre Royal Bath & UK Tour) and Jennifer Lore in the UK Tour of Nativity - The Musical.  Her other theatre credits include Travels With My Aunt (Chichester Festival), The Lady of the Lake in Spamalot (West End and UK Tour) and the original London cast of Wicked.