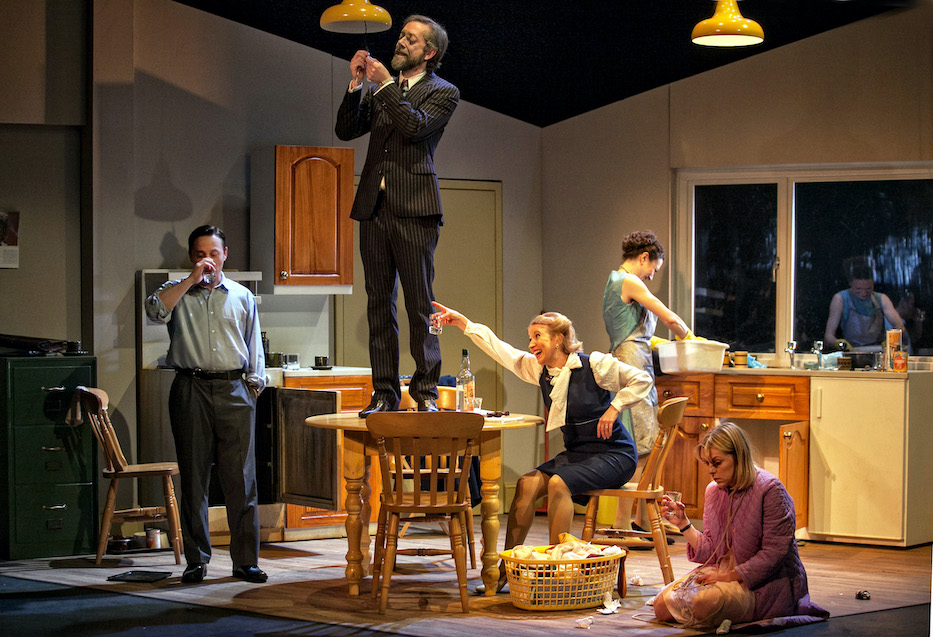 Artistic Director Michael Cabot said today “We are thrilled to be getting back on the road again. After such a turbulent and challenging year, we are looking forward to reconnecting with audiences and playing our part in the return of live theatre around the UK. We have been in regular contact with our cast and stage management throughout the shutdown and I’m delighted that they are all returning for the new tour. They are a fantastic team and it will be wonderful to see them all back at work, doing what they do best. Rehearsals start in four weeks and we can’t wait!”

Sidney Hopcroft, a small-time tradesman, persuades wife Jane to throw a party hoping to find favour with a bank manager and local architect. As celebrations begin, class differences and naked ambition combine to hilarious effect as, one by one, the characters seek refuge in Jane’s kitchen.

Over the next two years, the Jacksons and Brewster-Wrights take turns to host festivities. But Sidney’s star has begun to rise and roles are increasingly reversed as the cracks in the other couples’ marriages begin to show.

Absurd Person Singular first premièred in 1972 and was awarded the Evening Standard Award for Best Comedy.

Helen Keeley plays Eva Jackson. Previous credits for the company include Private Lives and The Importance of Being Earnest. Other theatre credits include The Picture of Dorian Gray (Trafalgar Studios/UK tour), Yap Yap Yap (Battersea Arts Centre), Half, To the End (Southwark Playhouse) and A Summer Day’s Dream (Finborough Theatre).

Graham O’Mara plays Ronald Brewster-Wright. Previous credits for the company include No Man’s Land. Other theatre credits include Government Inspector and The Three Musketeers (Young Vic), Borders (Arcola Theatre), BU21 (Trafalgar Studios), Romeo and Juliet, The Merry Wives of Windsor, Othello, A Midsummer Night’s Dream, The Wind in the Willows (Storyhouse, Chester), Sense and Sensibility (The Watermill Theatre), Alice (Sheffield Theatres), A Man of Letters (Orange Tree Theatre) and The Rise and Fall of Little Voice (Theatre Royal Bury St Edmunds). For television, his credits include Friday Night Dinner, Sirens and The Queen: 1974.

Michael Cabot directs and is the founder and Artistic Director of London Classic Theatre. He has directed all forty-one LCT productions since their touring debut in 2000, including No Man’s Land, My Mother Said I Never Should, Private Lives, Hysteria, The Birthday Party, Waiting for Godot, Absent Friends, Entertaining Mr Sloane and Equus. His freelance work as director includes three recent collaborations with award-winning playwright Henry Naylor, The Collector (Arcola Theatre & UK tour), Angel and Borders (Edinburgh Festival Fringe).