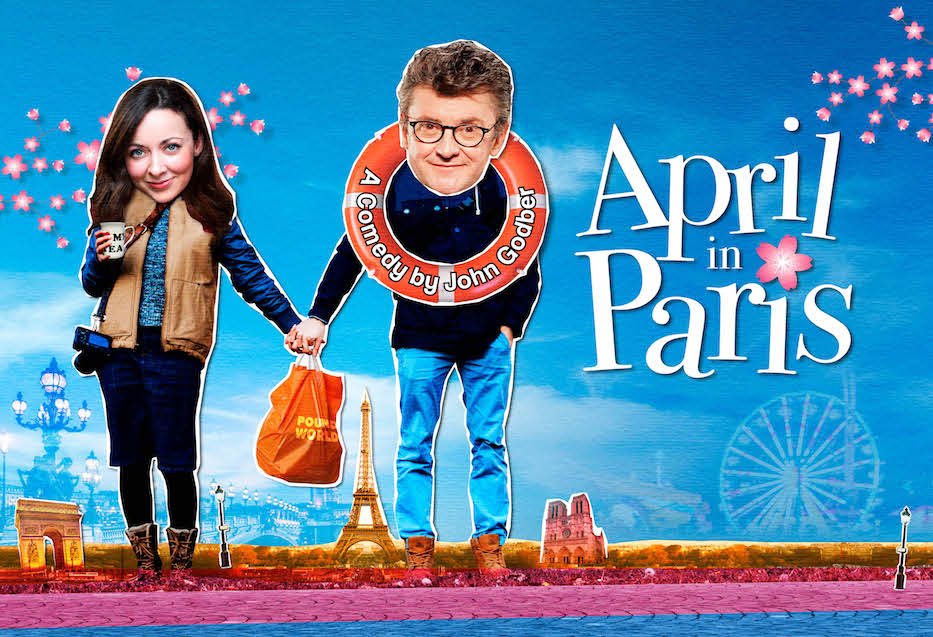 Joe Pasquale and Sarah Earnshaw will star as Al and Bet in John Godber’s classic comedy, April in Paris, which will tour the country, opening in Wellingborough on 28 January 2021, and will be directed by Richard Lewis.

In John Godber’s touching and hilarious classic, we go into the heart of one ordinary couple’s life as they go on both the journey of a lifetime and a journey into their relationship.  Al and Bet are in a rut.  Married for 26 years, their conversations are running dry and life has taken its toll. With his building work sparse and her shifts at the shoe shop getting few and far between there’s little to look forward to, apart from a possible ABBA tribute show in Wakefield and the odd trip to the pub.  But Bet has dreams.  She longs to walk with the Pharaohs in Egypt, sunbathe on golden beaches and climb Alpine mountains, all fuelled by her love of magazine competitions with holidays as prizes.  Finally, her luck changes; she wins a night away for two to Paris in April, via a luxury trip on P&O Ferries out of Hull.

John Godber says, “April in Paris is one of my favourite plays and I’m very excited about this new version with Joe and Sarah, directed by my long-time friend Richard Lewis. I hope that Al and Bet’s trip to the French capital helps to raise the spirits and even a laugh or two, as they rekindle their romance amidst the baguettes, Beaujolais and the steak tartare! The play’s message, that we need to be kind to each other, seems to me to be more relevant now than it ever was before!”

Joe Pasquale and Sarah Earnshaw had begun the second UK tour of Some Mother’s Do ‘Ave ‘Em when theatres were closed by the Government because of the Covid-19 pandemic, so they are delighted to be able to go out on the road again, as Joe explains:

“To say I’m excited about performing April in Paris would be an understatement, for lots of reasons.  One of the things that is so important is that we (Sarah Earnshaw, Richard Lewis and all at Limelight) will be on the front line with one of the first shows back into the theatre after such an horrendous year.... and we shall be flying the flag, so to speak, to the naysayers who say it can’t be done. Well, Richard and his team have proved them wrong; if you think outside the box, anything can be achieved.”

Producer and director, Richard Lewis added, “As I’m sure most people are aware, it is an extremely challenging time for the theatre industry.  It has effectively been banned for over eight months now and has created great hardship - for artists, for theatres and for producers.  As we move into the New Year, it is already clear that only venues that can function with restricted capacity will be allowed to open.  It is hugely challenging for theatres to find the type of product that can operate with these limitations.  This is why I am particularly delighted and proud that Limelight Productions has been able to create a show that can help bring live performance back to its audience.  John Godber’s April in Paris starring Joe Pasquale and Sarah Earnshaw is a funny, touching comedy that lifts the spirits. It will bring a little sunshine into the life of everyone who sees it, and I hope audiences will be encouraged to help support this initiative to bring back live performances.”

Comedian Joe Pasquale has delighted audiences with his live stand-up tours for over 30 years. Along the way he’s voiced characters for Hollywood movies Garfield: A Tale of Two Kittens and Horton Hears a Who!, children’s television animation Frankenstein’s Cat and starred in The Muppets’ 25th Anniversary Show.  Joe made his theatrical debut in 1999 in Larry Shue’s The Nerd, followed by the touring productions of Tom Stoppard’s Rosencrantz and Guildenstern Are Dead and Mel Brooks’s The Producers. In addition, Joe took part recently in ITV1’s The All New Monty: Who Bares Wins, he was crowned ‘King of the Jungle’ in ITV’s I’m A Celebrity…Get Me Out Of Here in 2004, appeared on five Royal Variety Performances, hosted his own ITV special An Audience with Joe Pasquale, at times hosted The Paul O’Grady Show for Channel 4 and hosted the long-running television series The Price is Right for ITV.

Prior to playing Betty, Frank’s long-suffering wife in Some Mothers Do ‘Ave ‘Em, Sarah Earnshaw most recently starred as Connie in The Nightingales (Theatre Royal Bath & UK Tour) and Jennifer Lore in the UK Tour of Nativity - The Musical.  Her other theatre credits include Travels With My Aunt(Chichester Festival), The Lady of the Lake in Spamalot (West End and UK Tour) and the original London cast of Wicked.