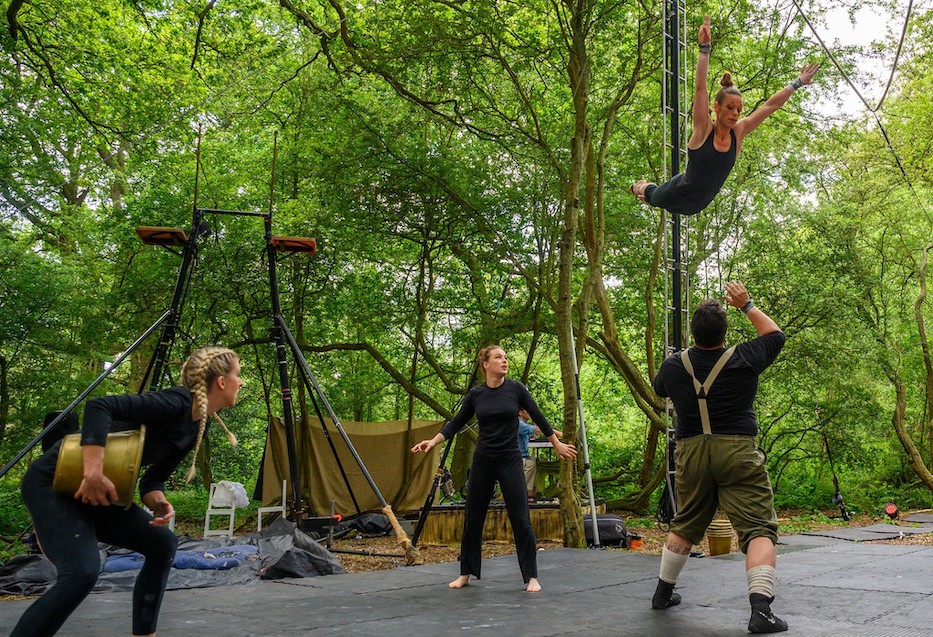 Lost in Translation, one of the UK’s leading contemporary circus companies, will celebrate their 10th anniversary with an exciting London tour this summer. This spellbinding circus company have delighted audiences across the world from Australia to the Edinburgh Fringe. As leaders in the field of story-led circus productions, Lost in Translation’s summer tour will feature fantastic full-length productions that will leave you in awe of the amazing acrobatic skills across the capital.

High-kicking off this exciting tour will be Lost in Translation’s Above at Wandsworth Arts Fringe this June – a work-in-progress enchanting circus fable. Inspired by Italo Calvino’s novel The Baron in the Trees, Above tells the story of a rebellious spirit who leaps from the ground to take up life among the treetops. Designed to delight audiences of all ages, this comical and exciting production features high-flying aerial stunts, amazing acrobatics and hilarious knockabout slapstick juggling.

From July, audiences can check into the much-loved Hotel Paradiso at both Rose Theatre, Kington and Underbelly Festival, Cavendish Square. A laugh-out-loud circus caper, Hotel Paradiso is a hilarious and boisterous family show for adults and children alike. Audiences will be treated to amazing aerial stunts, floor acrobatics and juggling alongside clowning and a stunning soundtrack by renowned composer Peter Reynolds. Hotel Paradiso epitomises what Lost in Translation do best, showcasing the daring and virtuosic skills and tricks of this multi-national and multi-talented cast of performers. This thrilling production includes Company Director and Performer, Massimiliano Rossetti and core artist, Roisin Morris, the Guinness World Record holders for most catches on the Korean Cradle – a discipline rarely seen on UK stages. For this summer only, Hotel Paradiso will also feature a special guest performance from award-winning circus and cabaret artist Abigail Collins (La Clique, West End).

Massimiliano Rossetti comments, We’re so excited to be back on stage with a bang for our 10th anniversary year! At Lost in Translation, we have a deep desire to connect people, communities and cultures through our character driven theatrical shows and our trademark warm humour. This past year has seen us separated from both our loved ones and what we love doing, so we can’t wait to bring a smile to new audiences across the capital.

There's lots more in store for Lost in Translation's 10th anniversary and further announcements will reveal their summer festival in Norwich as well as their exciting Christmas show at Jackson's Lane.

The circus tricks are amazing, they’re almost incidental to the plot, woven in seamlessly… Easily the best family show at the Fringe and one which all the family, including ‘hard to please dads’ will thoroughly enjoy (★★★★★, Theatre Reviews Design).

Hotel Paradiso is the sort of Fringe show everyone should see; it’s sassy, funny, clever and brilliantly put together (★★★★★, The Barefoot Review).