Extra dates fro UK tour of A Splinter of Ice 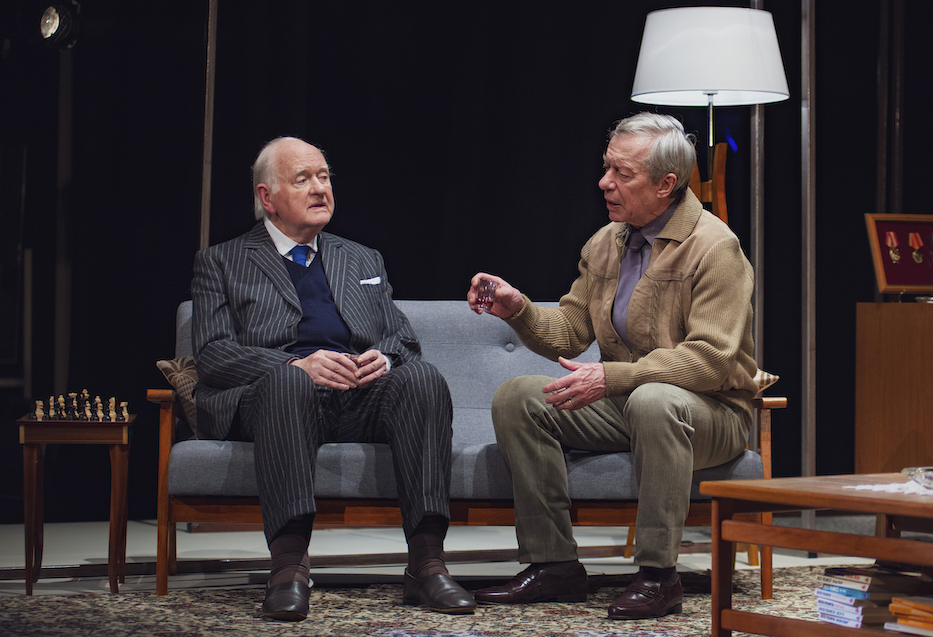 New dates have been added to Original Theatre Company’s first live stage production since March 2020.  The UK Tour of Ben Brown’s new political drama, A SPLINTER OF ICE, will open on 8 June in Malvern and will tour until 31 July, with extra dates in York and Cambridge. We can also announce that Karen Ascoe will be joining the previously announced Oliver Ford Davies (Graham Greene) and Stephen Boxer (Kim Philby) as Rufa Philby.  The tour is directed by Alan Strachan with Alastair Whatley. This critically acclaimed online version was filmed on the stage of the Cheltenham Everyman Theatre, with Sara Crowe as Rufa Philby.

Moscow 1987 and the cold war begins to thaw.  After declining his offer for more than 30 years, novelist Graham Greene travels into the heart of the Soviet Union to meet with his old MI6 boss, Kim Philby.  Under the watchful eye of Russian memoirist and Philby’s last wife, Rufa, the two men set about catching up on old times.  With a new world order breaking out around them, how much did the writer of The Third Man know about Philby’s secret life as a spy and did Philby betray his friend as well as his country?

From the writer of the award-winning West End play Three Days in May, which inspired the Oscar-winning film Darkest Hour, Ben Brown’s new political drama explores an unlikely friendship; a friendship interwoven with deceit and loyalty.  Ben said of this production of A SPLINTER OF ICE, “I’m thrilled to be working again with Alan Strachan and Oliver Ford Davies and to be joining forces with Stephen Boxer, Sara Crowe and Alastair Whatley for the premiere, at last, of my new play, online prior to a national tour.”

Alastair Whatley, Artistic Director of Original Theatre Company, said, “I am thrilled that we are producing Ben’s fantastic new play with such a wonderful cast and creative team. The plan was to open this in front of audiences at the end of March, but alas, once again, plans have changed. Instead of cancelling, we will now film the production at the beautiful Everyman Theatre in Cheltenham, releasing the play to our audiences around the world, before then returning to stages across the UK as soon as theatres re-open.”

Stephen Boxer’s theatre credits include The Remains of the Day (UK Tour), Titus Andronicus, The Heresy of Love, The Taming Of The Shrew, Bartholomew Fair, Measure for Measure, Twelfth Night, The Herbal Bed, The White Devil, The Duchess Of Malfi, Richard III (all for the RSC), Macbeth, King Lear, Aristocrats, Volpone (all for the National Theatre), The Hypochondriac and A Chaste Maid In Cheapside (for Almeida Theatre). Stephen’s most recent television credits include Denis Thatcher in The Crown, Small Axe, David Elster in Humans and Poldark.  He also played Rene Azaire in Original Theatre’s highly acclaimed online production of Birdsong earlier this year.