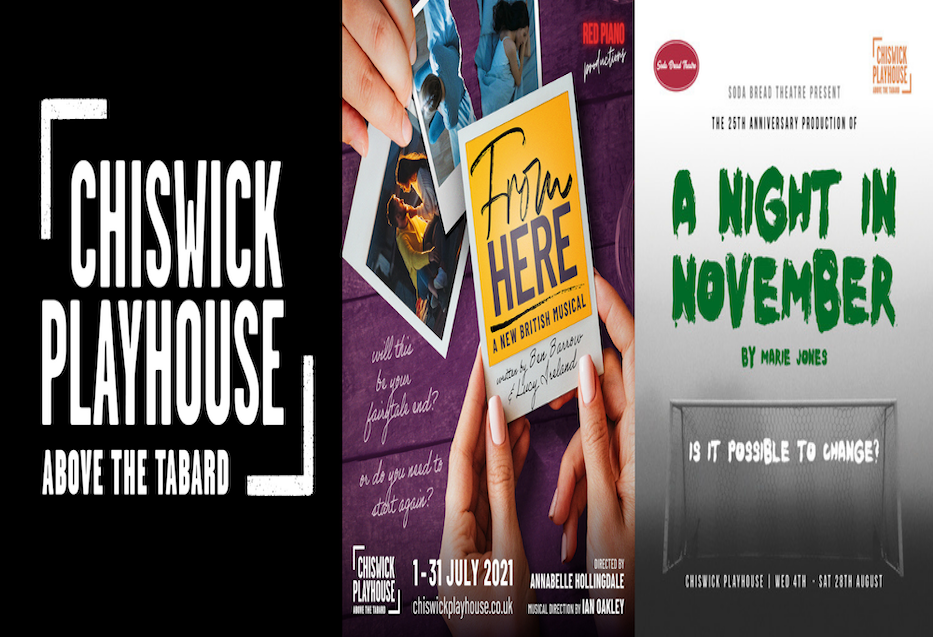 Chiswick Playhouse now announces its summer season. The venue is presenting an ambitious world premiere with From Here: A New British Musical (1st – 31st July) and then marking the 25th anniversary of Marie Jones’ A Night in November (4th – 28th August) by staging the touring production.

The world premiere of From Here: A New British Musical is a new musical from Ben Barrow and Lucy Ireland. With four performers bringing to life the often musically-interwoven stories of several characters, the show asks the question of whether we are driven by the notion of a fairy-tale ending to our lives or are we constantly looking for something new. Finding love, marriage, family, are these the milestones we should strive for… or is there something else that we’re missing?

This funny, heart-warming and reaffirming show is produced by Dominic Gray for Red Piano Productions in association with the Chiswick Playhouse. From Here will be directed by Annabelle Hollingdale (Resident Director, Spring Awakening, The Hope Mill Theatre; Assistant Director, Heathers, The Other Palace) with musical direction by Ian Oakley. Set and costume design will be by Jessica Staton, with sound design by Tony Gayle.

Multi-award winning A Night in November from Marie Jones (Stones in his Pockets, Christmas Eve Will Kill You, See How Far We've Come) is a funny, passionate and heart-breaking show telling the story of Kenneth McAllister, a clerk in the local welfare office. Kenneth is a Belfast Protestant who has followed all the rules. He loved who he was supposed to love. He lived where he was expected to live. He fought who he was taught to fight. That is, until one night in November, when he did the most exciting, outrageous, crazy, mad thing he'd ever done.

Produced by Sodabread Theatre in association with the Chiswick Playhouse, A Night in November will be directed by Matthew McElhinny and starring Matthew Forsythe (Mydidae, The Mac Belfast; BBC’s The Fall).

Mark Perry, Chiswick’s Executive Director, said, We are delighted to present our summer season, featuring From Here and A Night in November. We are working in association with two exciting, ambitious producers that are bringing exactly the type of up-and-coming creatives that we’re committed to backing. As soon as we first heard the fresh, funny music and lyrics of From Here we knew we wanted to bring it to Chiswick. And the fascinating, insightful perspective of Northern Ireland that’s revealed in A Night in November grows ever more prescient. Written in 1994 it feels just as relevant now as it did then. We are so looking forward to opening our doors again and welcoming back our audiences to what will be just the sort of live entertainment we’ve been missing for far, far too long.