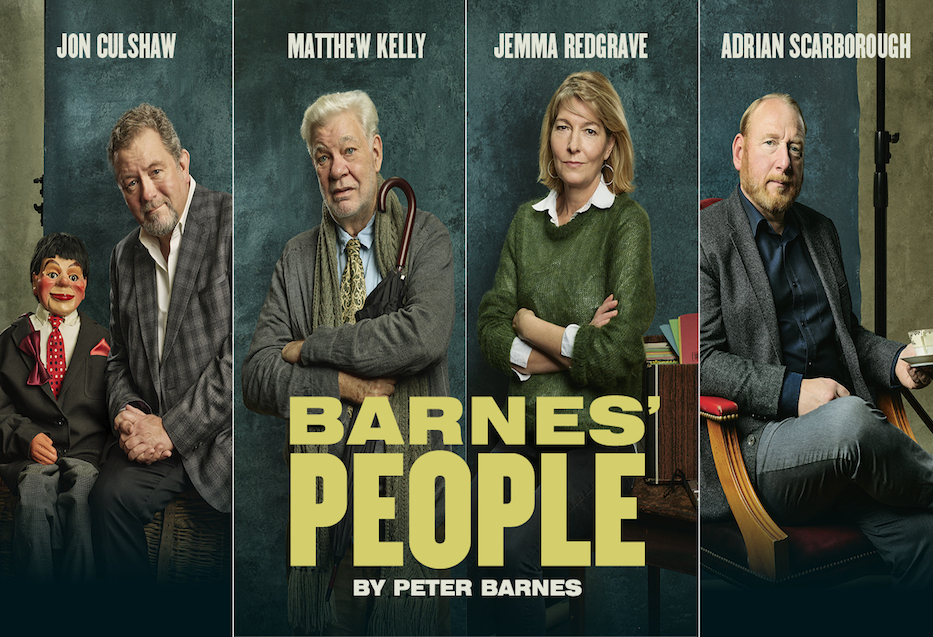 Original Theatre Company – the production company behind the critically acclaimed lockdown productions of Sebastian Faulks's Birdsong Online, Louise Coulthard’s Watching Rosie, Torben Betts’s Apollo 13: The Dark Side of The Moon and Philip Franks’s The Haunting of Alice Bowles – and Perfectly Normal Productions are delighted to present the first revival of Barnes’ People, a series of four theatrical monologues starring Jon Culshaw, Matthew Kelly, Jemma Redgrave and Adrian Scarborough and directed by Philip Franks and Charlotte Peters.  The production will be streamed from 18 February to 31 July 2021.

From writer Peter Barnes (The Ruling Class) comes a selection of four exquisitely crafted monologues, performed by four of our leading actors and filmed on stage at the Theatre Royal Windsor.

For Michael Jennings, the only way to fight the voices in his head is to bring them to life. In fact he’s made a career from it.  Now, seemingly alone on an empty stage, Billy, his stage partner of 25 years, keeps interrupting him.  Which would be fine, except that Billy is a puppet.  Billy and Me is a hilarious and daring examination exploring what happens when a ventriloquist lets the puppets take control.

Adams used to have everything, with the world at his feet.  Now he’s lost his faith… and his rocking horse.  On a solitary bench within the hallowed confines of one of London’s forgotten churchyards, Adams sits on a bench for his final conversation with an old friend.  With poignancy and profundity he must come to terms with who he has become and where he is going, but it’s going to rain and the bulldozers are moving in.

Dr Rosa Hamilton is tired.  After twenty years of battling the system, drowning in paperwork and watching patients fade away in care homes, she’s tired, she’s angry and she really wants a drink.  Especially as she’s about to dictate the most important letter of her life.

Leslie has been a footman at Buckingham Palace for thirty years.  A life of service, a life of discretion and a lifetime of secrets.  Originally banned from broadcast by the BBC and never seen before, this world premiere takes you behind the scenes of the most famous of royal palaces for an unforgettable audience with a true born Englishman.

Co-producer David Morley of Perfectly Normal Productions said of the the monologues, “All our monologues are from Peter Barnes’s work commissioned by BBC Radio 3.  Rosa is from a series called Barnes’ People, broadcast in 1981 and was originally performed by Judi Dench.  Losing Myself and Billy And Me were from a second series on BBC Radio 3, called More Barnes’ People.  These aired between 1989 and 1990.  Jeremy Irons was in Losing Myself and Alan Rickman played Jennings in Billy And Me.  The controversial play in our four is A True Born Englishman.  This was commissioned by BBC Radio 3 as part of More Barnes’ People.  It was cast with Antony Sher in the role and scheduled, but when the production team referred the script to higher management, they decided not to go ahead.  Peter Barnes described this as ‘banning’ the play, because of its Royal Family theme, which the BBC denied.”

Director Philip Franks added, “Peter Barnes’ monologues have all the qualities of his plays— all the passion, wit, anger and compassion- condensed into urgent 20 minute plays. They feel like they could have been written yesterday.”