All On Her Own by Terence Rattigan, starring Janie Dee, to stream from 16 February 2021 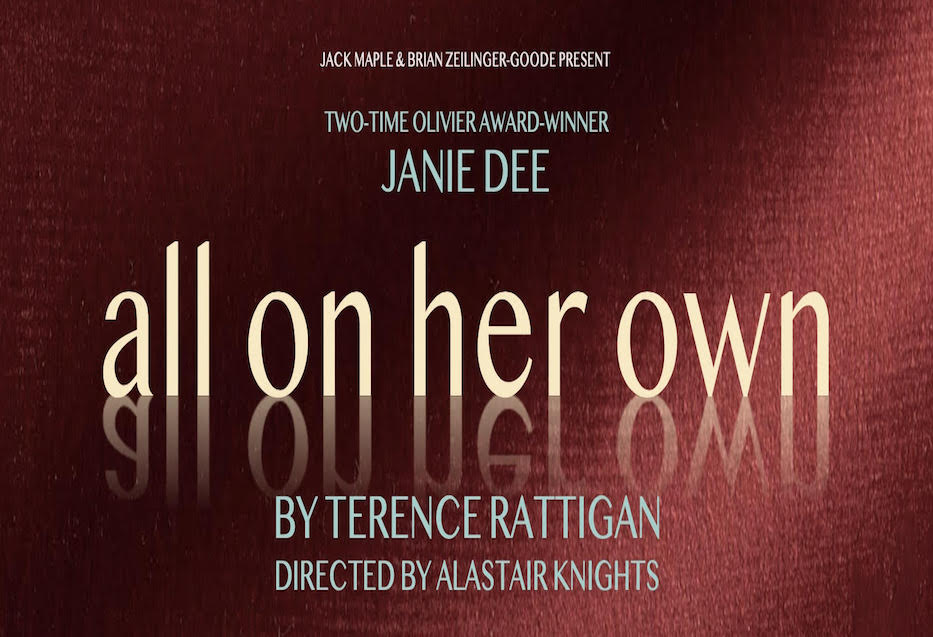 Jack Maple & Brian Zeilinger-Goode for MZG Theatre Productions will produce a brand new digital production of Terence Rattigan’s one-woman play, All On Her Own, starring award-winning actress Janie Dee and directed by Alastair Knights, with Jack McCann as assistant director and original music by Lindsey Miller. The show will be available to stream for eight performances only via stream.theatre from 16 to 21 February 2021.

A powerfully atmospheric one-woman play, All On Her Own tells the story of Rosemary who, alone at midnight in London, has a secret burden to share that is both heartbreaking and sinister.

The play began life as a piece for television, broadcast on BBC2 on 25 September 1968.  It was first performed on stage at the Overground Theatre, Kingston, Surrey, in October 1974 and was most recently seen at the Garrick Theatre in April 2015 starring Zoe Wanamaker as part of the Kenneth Branagh Season.

Terence Rattigan is one of Britain’s greatest playwrights.  His many successful plays include French Without Tears, After the Dance, Flare Path, Man and Boy, The Winslow Boy, The Browning Version, Harlequinade, The Deep Blue Sea, Separate Tables, In Praise of Love and Cause Célèbre.  Sir Terence Rattigan died in 1977.  Royalties from this and other Rattigan works benefit Denville Hall and the King George V Fund for Actors and Actresses.

Janie Dee’s much celebrated theatre work includes The Boyfriend (Menier Chocolate Factory); Follies, Women of Troy and Carousel (Olivier Award) at the National Theatre; Antony and Cleopatra (Hollywood Bowl and Barbican), A Midsummer Night’s Dream (Russia and Asia tour) and All’s Well That Ends Well for Shakespeare’s Globe; Hello, Dolly! (TMA UK Theatre Award) and The King and I at Curve Leicester; My One and Only (also West End), A Month In The Country and Three Sisters at Chichester; Noises Off at the Old Vic and in the West End; Hand To God, Blithe Spirit, Donkey’s Years and Calendar Girls in the West End. Janie won the three most prestigious awards in British Theatre – the Olivier Award, the Evening Standard Award and Critics’ Circle Award – for Best Actress in a Play, as well as the Obie and Theatre World Best Newcomer Award in New York, for her hilarious and heartbreaking performance as Jacie Triplethree in Alan Ayckbourn's Comic Potential. Janie's numerous screen credits include Chimerica, Love Hurts and House of Cards, and she has appeared alongside Colin Firth in Harold Pinter's Celebration for Channel 4, opposite Martin Shaw in P.D.James's Death in Holy Orders and The Murder Room, as Zac Efron’s mother, Mrs Samuels, in Me and Orson Wells, and as Jan Clements in the feature film Official Secrets with Keira Knightley and Ralph Fiennes.