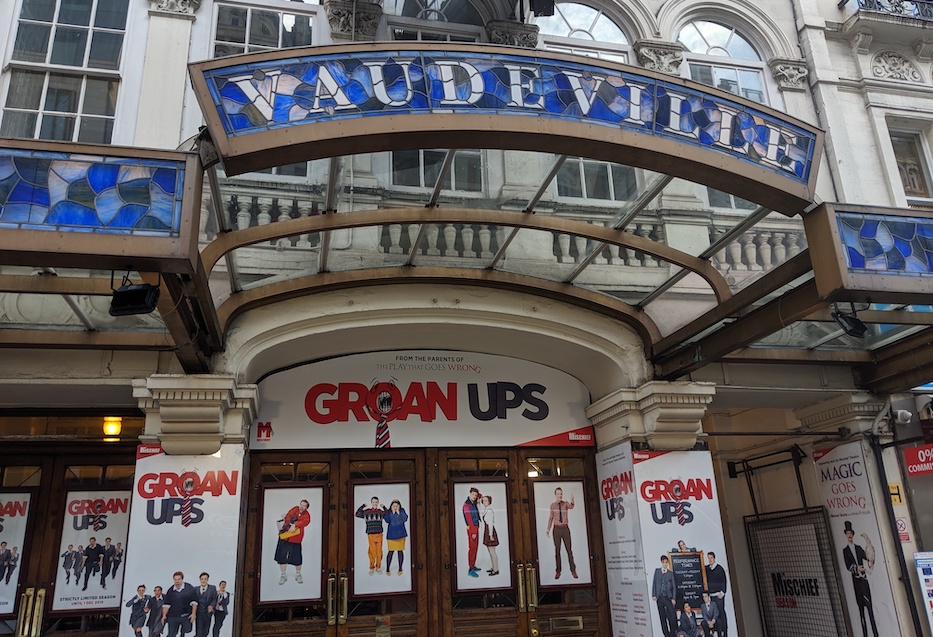 The Vaudeville, like many of London's earlier West End theatres, suffers from a constricted site which allows for little in the way of improvements unless additional property is acquired (a move which may be highly unlikely at today's West End land prices, but should nevertheless be kept in view). In 1882, Captain Shaw estimated that the safe capacity was 792 at a time when the management was claiming nearly double that. The modern figure of 690, in a slightly larger auditorium, gives some indication of the trend over the ensuing century for theatres to become more comfortably (and safely) seated.

The second front supplied by Phipps in 1891, as an alteration to his 1870 theatre, remains with little obvious change, apart from the canopy, which dates from shortly after Robert Atkinson's 1926 reconstruction. This Strand façade is in stone, four storeys in height, five windows wide, with a balustraded front to an arcaded first floor loggia (now glazed) and rather domestic-looking windows with thin Italianate detail above. Parapet originally had central panelled blocking crowned by pediment. Atkinson carried out major alterations behind, and gave the rear elevation to Maiden Lane an elegant façade in an Adamesque manner, built in yellow brick and stone with a fan lunette, all contained under a brick arch.

The auditorium is rectangular, two balconies with neo-Adam ornament. The rear stalls have some cut-off, as a reminder of the existence of a benched pit in Phipps's theatre. Although largely Atkinson's work (1926), the cove and ceiling date from Phipps's 1891 building.

Some wooden machinery still existed in 1972 above and below stage, including a thunder sheet and thunder drum.