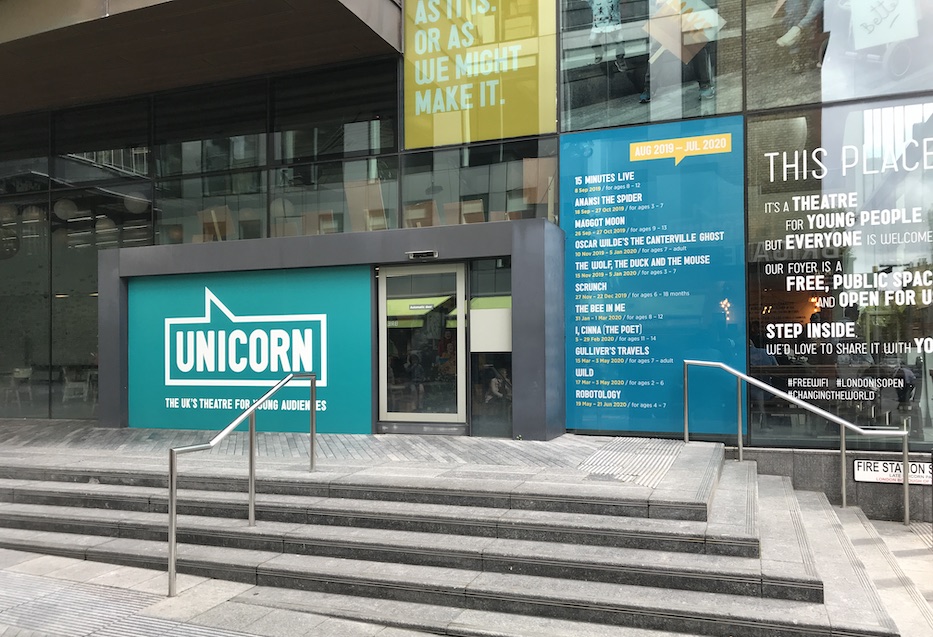 In 1947 Caryl Jenner founded Mobile Theatre, with the idea of touring shows for children and adults throughout the country in an ex-army truck. By the end of 1948, the company had played to over 25,000 children and travelled over 5000 miles. Additional trucks were purchased and, by 1958, three companies were concentrating entirely on performance for children as 'the English Children's Theatre', becoming the Unicorn Theatre Club in 1962. An appeal was launched in 1960 to create a permanent London base. In 1961 the company presented its first Christmas season at the Arts Theatre. By 1967, it had taken over the lease of the building where it remained until 1999 when land on Tooley Street was identified as the possible site of a brand new theatre. Building commenced in 2003 and the Unicorn Theatre was officially opened by Lord Attenborough as the first purpose-built theatre for children in the UK on 1 December 2005. The constricted site of the theatre influenced the vertical order of the building. The larger of the two theatre spaces, the Weston Theatre, is lifted up above the smaller theatre and foyer. It is reached by a 'grand stair' visible through the glazed elevation of the foyer when approaching the main entrance. The staircase emerges into the foyer as a vertical series of balconies with balustrades of fair-faced concrete pierced with glazed panels to enable shorter patrons to look over the foyer below. At ground level, the smaller Clore theatre acts as the main support for the overhanging form of the large theatre, under which nestles the double-height volume of the foyer. This enables the architectural play of interlocking volumes, voids and clear openings which runs like a leitmotif throughout the composition of the building. The design team began its research at Peter Brook's acclaimed theatre in Paris, the Bouffes du Nord, where the storytelling style, 'one room' principle, non-proscenium thrust stage influenced the Weston Theatre's development. The design included an innovative system of overhead bridges with "flip-up" floors which enables the theatre to achieve full height flying without the expense of a fly tower. Viewed from Tooley Street, the rectangular mass of the large auditorium is clad in pre-oxidised copper panels which wrap around and continue internally under the volume of the space. This disguises the 'amphitheatre' form of the theatre space within, where steeply raked audience seating on two levels curves around an arena stage combining a storyteller's intimacy with the technical wherewithal to mount large scale productions. Juxtaposed against the volume of the large auditorium, a contrasting white rendered mass of less than half the width of the auditorium hangs as another volume, which encloses the Foyle Education Studio at tree-top level and reveals the 'grand stair' below. At a practical level, building on a brownfield site has provided the opportunity to carefully plan the relationships between the various facilities, for example the central Wardrobe construction and maintenance facilities are conveniently close to both stages, while each theatre is allocated an exclusive suite of dressing rooms. The Education Department's office is found adjacent to the Foyle Education Studio, and the Technical/Production Offices are on the same floor as the technical gallery and Control Room in the Weston Theatre. The only visible concessions to children's physical size are the height of the seats, the double height handrails on the stairs, the ascending scale of the hand basins in the toilets, the glazed drop in the concrete balustrade to the grand stairs and a small box seat in the foyer with a roof preventing grown-ups from sitting on it. Keith Williams has designed a grown-up building to stimulate the imaginations of the children, families and schools who visit.