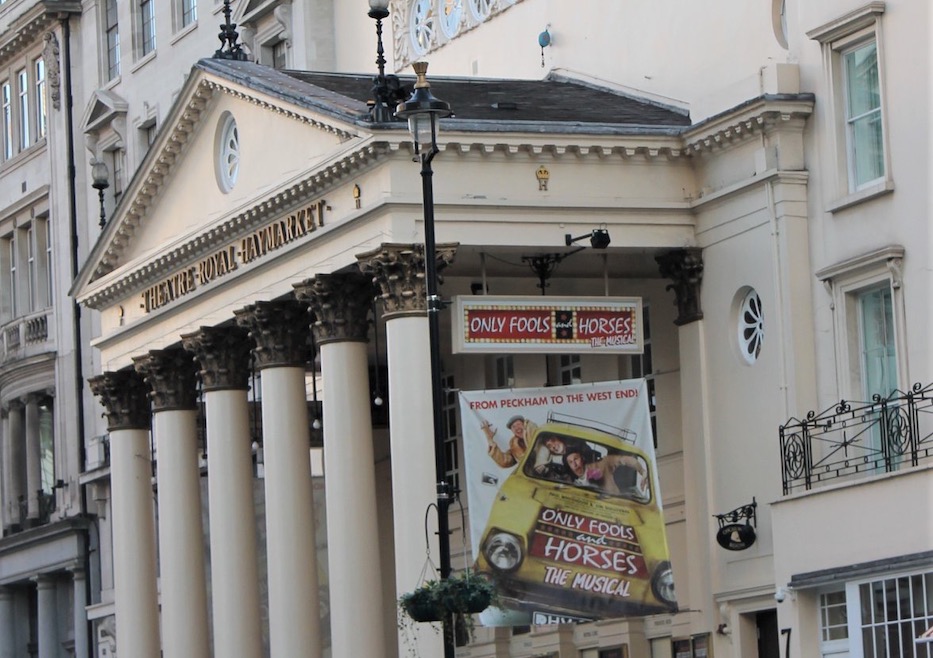 The Haymarket is of great importance in theatre history. The first theatre to defy the monopoly of the patent houses, the ‘Little Theatre in the Hay’ (adjoining the present site) was built in 1720. It gained a limited patent in 1766-77 and was afterwards granted a special licence. The theatre was rebuilt on the present site by John Nash in 1821, closing the view from St James’s Square.

This is a much studied theatre, the subject of many books and papers but, so far, no detailed and authoritative architectural account has been published. The Survey of London (vol XX) is, for once, quite inadequate (compare the Survey’s outstandingly full account of Her Majesty’s Theatre, opposite). The building is, nevertheless, of exceptional interest in its own right and of great townscape value. It is one of the few pre-1880 theatre buildings in London and shares with Drury Lane Theatre Royal and the Lyceum the distinction of presenting a pre-Victorian external appearance.

The present stucco porticoed classical façade, rear elevation and much of the structural envelope are by Nash. The Suffolk Street elevation is designed as a stuccoed house front, domestic in conception apart from its tall scene door.

The auditorium is by Adshead (for Peach), 1905, completely replacing the Phipps auditorium of 1879-80 (Phipps had provided Bancroft with the first four-sided picture frame stage). Subsequent internal alterations to bars, etc, mainly by John Murray and sympathetic in character. The 1994 works to the auditorium constituted a careful restoration of Peach’s & Murray’s works.

The 1904 drawings show that the Peach works were limited to the public interiors with only minor improvements backstage. Beyond this, little seems to be later than mid-nineteenth century in date.

The auditorium has two balconies, the upper one extending back into a gallery of great interest and limited comfort, with padded benches. Architecturally and decoratively this is one of the most distinguished and brilliantly preserved interiors in London.

There are some traces of old stage machinery. The main roof space and stage house roof are still lit by dormers, but the property rooms and scene painting room have long been removed.