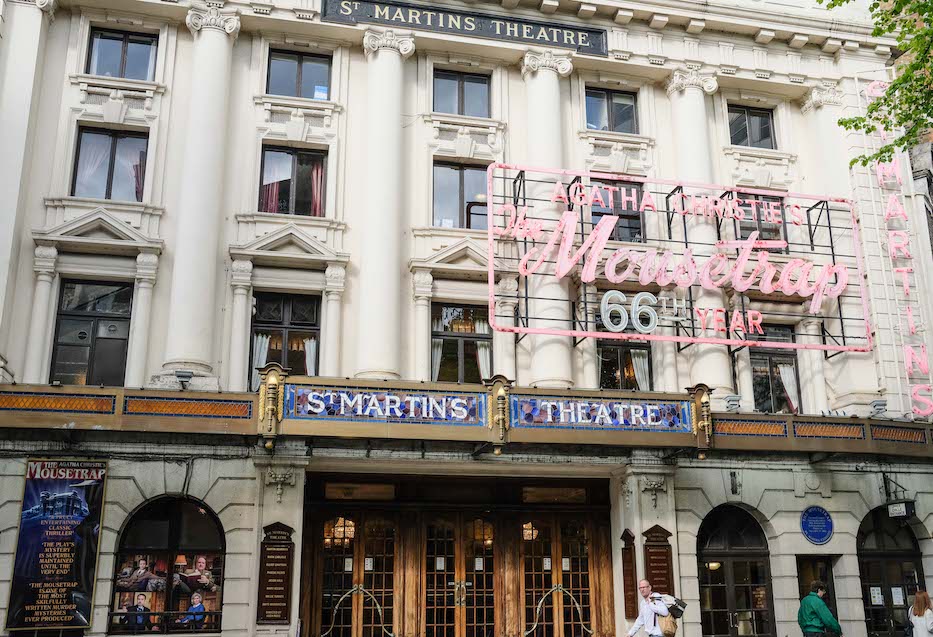 The St Martin's Theatre was planned at the same time and should have been completed with the Ambassador's (q.v.) but was delayed by the outbreak of the Great War. The two theatres were separate ventures but they were designed as companion buildings and stand on either side of Tower Court. Further research is needed to establish whether the executed design was modified in any way during the three years delay in building. St Martin's has a rather more imposing façade than the Ambassador's; ashlar faced in five bays with giant attached Ionic columns through the upper three storeys, supporting an entablature and parapet. A coat of arms above the parapet was blown down in World War II. Plain modern canopy over the entrance. Good foyer.

The prettiness of the Ambassador's auditorium gives no warning of the classical sobriety to come at the St Martin's. Sprague's St Martin's auditorium abandons completely the exuberant displays of fibrous plaster work which typified theatre design (including Sprague's own designs) in previous decades. The style was described as 'Georgian'. Much polished hardwood. Flat side walls with imposing fluted Doric columns and piers, rising from pedestals at first balcony level to carry a correct entablature with triglyphs and mutules, continuing over the rectangular, cavetto-moulded proscenium. Two serpentine balconies, their fronts differently curved, both with turned hardwood balustrades. The lower one runs into single boxes on either side of the proscenium. One box is real, the other a dummy, but fully draped. Boxes also at rear of circle. The auditorium was splendidly redecorated in 1996.

Unusually for such a late date, the substage has a remarkably fine (perhaps never used) set of wooden stage machinery, almost complete but marred by the insertion of a control room, eliminating paddle levers and sliders.