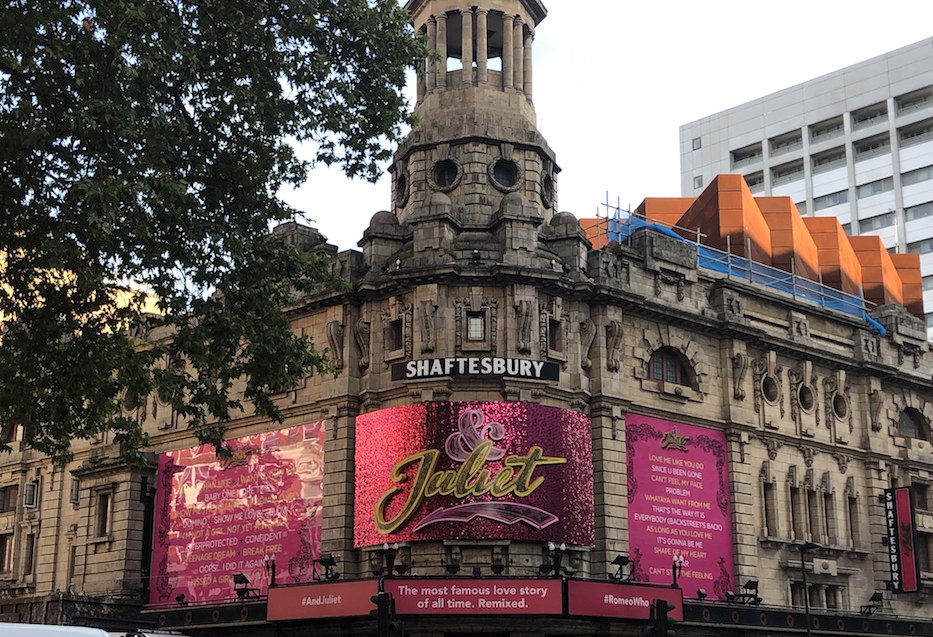 The Shaftesbury (ex Princes) was the northernmost and, in point of time, the last of the eight pre-Great War theatres built in Shaftesbury Avenue. The theatre occupies a prominent corner site and is viewed across a wide road junction. Its terracotta faced elevations, however, are in a quite subdued Baroque manner, the corner tower making a punctuation of spirited but unmonumental character. Good foyers. Spacious auditorium with two cantilevered balconies (the upper circle is the front section of the former gallery), the fronts varied in both form and treatment. Uninhibited plaster decoration, robust rather than elegant, but producing a splendidly theatrical atmosphere. Rectangular ceiling with enriched cove and cornice and circular flat-domed centre. Segmental proscenium arch with figure reliefs in spandrels over. Bow-fronted boxes paired in two tiers and magnificently framed by elegant Ionic columns rising from heavy console brackets and carrying an entablature, the whole composition crowned by a semi-circular arch. In the arch tympanum a sculptural group is set on an elaborate pedestal over each upper box. The auditorium was designed with a sliding roof to give an instant air change when required. Designed as a melodrama house this theatre has had a varied history and was dogged by misfortune for some years. After the run of ‘Hair’ (1968-73) its survival appeared to be in doubt. A ceiling fall in the auditorium in 1973 necessitated closure and seemed likely to lead to the demolition of the theatre. It was then, however, added to the statutory list and the ceiling was eventually restored and the theatre reopened. The Shaftesbury was an early battle honour for the Save London’s Theatres Campaign. Listed building consent was granted by the London Borough of Camden in March 2013 for internal and external alterations to the Grade II listed theatre to ensure the long-term viability of the venue to accommodate large-scale self-produced and touring productions. The flytower extension that started in 2015 will increase its height and loading capacity from 12 to over 30 tonnes. This roof-level extension is clad in corten steel which will slowly oxidise to a warm brown patina to blend in with the brick and terracotta facades of the theatre and adjacent buildings. The continuous faceted form of the flytower will reduce its visual massing and echo the diagonal of the site’s relationship with Shaftesbury Avenue and High Holborn. The facets will create a series of bays reflecting the local scale and grain and accommodating windows and ventilation louvres to bring light and ventilation to the internal spaces. New dressing rooms will give the theatre space for an additional 10 performers and new office space will house staff currently working in nearby leased offices. The extension work continues a programme of investment over the past ten years that has included refurbishing the interior and restoration of the historic facade.