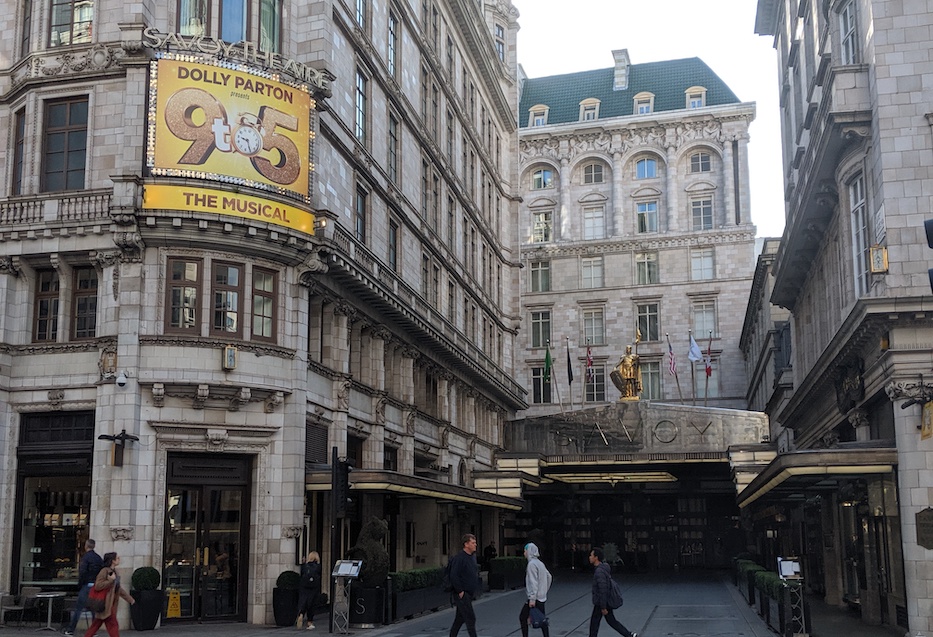 When the Savoy Theatre was totally gutted by fire in February 1990 it seemed to many that it was unlikely ever to be restored and reopened in its old form, but this was magnificently achieved in summer 1993. When account is taken of the extent of the devastation and the fact that most original records had been destroyed (not by fire but by the D'Oyly Cartes), the restoration is a triumphant example of what can be achieved by a meticulous examination of fragmentary remains, coupled with research and deductive skill. Uppark is the most famous example of 'post-fire archaeology' and reconstruction, but amongst theatres in Britain the Savoy is the only one to have had this kind of care lavished on it. The fire did little damage backstage and here the alterations are not obvious, although the stage itself has been completely modernised and re-equipped. Substantial parts of the structural shell of the 1881 theatre, built by Phipps for Richard D'Oyly Carte to house Gilbert and Sullivan operas, still survive. The interiors, however, as recreated, are entirely those designed by Ionides or (in places where provision for modern demands made it necessary) by Whitfield Partners in the Ionides manner.

Whitfields raised an additional storey above the theatre to contain plant and a health club (linked to the hotel) with a swimming pool above the stage house. This top hamper is carried on cunningly concealed stanchions and massive beams. Although it was the profits from the theatre that originally paid for the building of the hotel, the latter has become visually dominant, so that it is the theatre that now looks like the later addition. Externally, the only recognisable surviving part of the Phipps theatre is the former main entrance on the curved Carting Lane/Somerset Street corner, a remnant dressed in a rusticated Italianate style. On the formerly plain front facing the now little frequented Carting Lane, Whitfields have created a unified elevation with two boldly projecting pavilions concealing, inter alia, part of the structure supporting the added storey. Their design picks up the architectural vocabulary of the 1881 relic, but makes a rather more vigorous statement than the average Phipps façade.

The Savoy Court elevation is the restored 1903 entrance, as modified by Easton & Robertson in 1929, with a row of heavy glazed metal doors under a forward extension of the pedimented stainless steel-faced canopy of the hotel. The doors open into a small booking hall and staircase leading down to foyers, bars and auditorium, all in a full-blooded Art Deco manner which owes little to Tugwell and everything to Ionides.

The auditorium is one of the truly outstanding examples of geometrical Deco invention. There are two balconies with tongue-fluted faces, the upper one set back, with thin slips. From the slips forward to the proscenium, the side walls are canted and carry a deep sounding board, all divided into panels in an illusionistic perspective pattern. The glazed sounding board panels conceal house lighting. The 82 side wall panels are decorated in low relief with Chinese motifs, mainly derived from a great lacquer screen of the Ming Qing dynasties in the Victoria and Albert Museum. No two panels are alike. There is one recessed box with an iron balustrade in the panelled wall on stage left.

The rear half of the auditorium has boldly fluted all-over wall decoration. The main ceiling is painted as a sky with clouds, now penetrated by a neatly inserted lighting position. The fourth wall is completed by richly coloured and roped house tabs. Apart from the painted ceiling and the painted elongated geometrical panels on the balcony soffites, the ornamented surfaces on all sides are aluminium leafed, as they were by Ionides, and over-lacquered in subtly varied transparent tints. The seat covers, reproduced from a discovered fragment, are variously coloured, with commendably clear numbers on the fore edges.

The total effect is striking. It would be a great pity if this fine theatrical interior were to be marred by the casual additions and subtractions of those (thankfully few) directors and lighting designers who still undervalue the contribution which architecture plays in the experience of theatre-going.