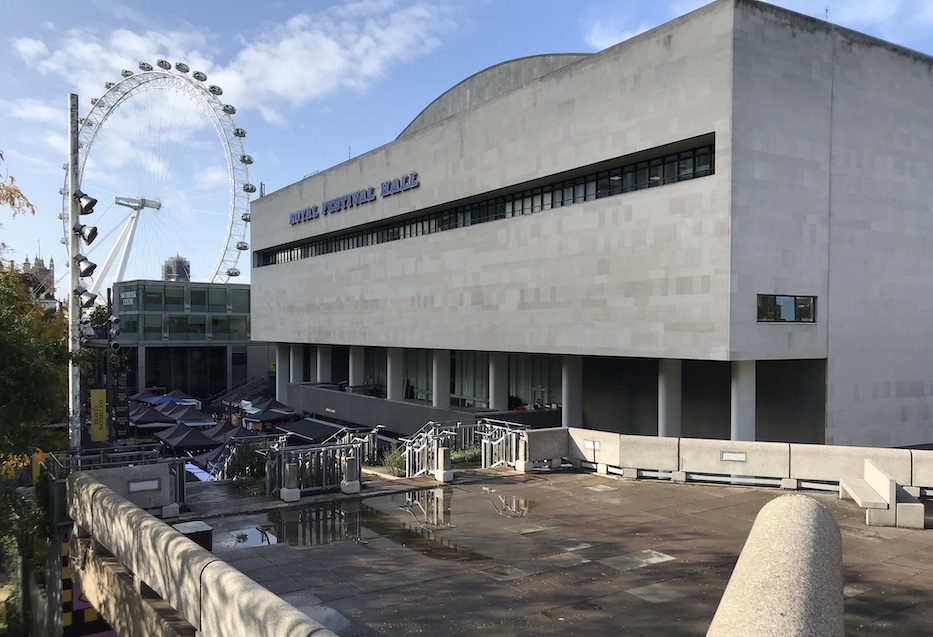 The Royal Festival Hall forms part of the South Bank. The site which covers 27 acres was once marshland, drained at the beginning of the eighteenth century and developed in 1718 by Charles Bascom for a house, named Belvedere, and a pleasure garden. Later the site was occupied by Lamberth Waterworks, and then by the Lion Brewery. Damaged by enemy action, this was demolished and the Festival Hall opened in 1951 as London County Council's contribution to the Festival of Britain as a permanent concert hall, built amidst the temporary buildings of the Festival.

The facade to the river, now containing the main entrance, cafe, box office and shop makes a bold statement of Festival of Britain elements in the stone horizonal banding between the rows of windows at first and second floor level, often decked with flags and banners. The outer walls of the auditorium are faced with Hopton Wood (Derbyshire) fossiliferous limestone (a seahorse may be seen in the stone from one of the staircases). The "net and ball" carpet is the original 1951 design.

The auditorium remains unchanged since opening. Special attention in the design allowed for the exclusion of outside noise and for the best acoustic possible. Thus the cavity walls are several feet wide, and the walls and doors are padded with red leather. The wave formation of the roof canopy serves to project sound to the rear of the hall. An organ was designed and installed in 1954. The platform stage is in three sections, raised hydraulically. For productions such as ballet a proscenium arch is erected above the platform. There is a ceremonial box.

In 1995, The People's Palace opened in the Royal Festival Hall, a 200-seat cover restaurant, designed by Allies and Morrison.

Other buildings added to the South Bank are the two smaller concert halls, the Queen Elizabeth Hall and the Purcell Room (1967) and the Hayward Gallery (1968).