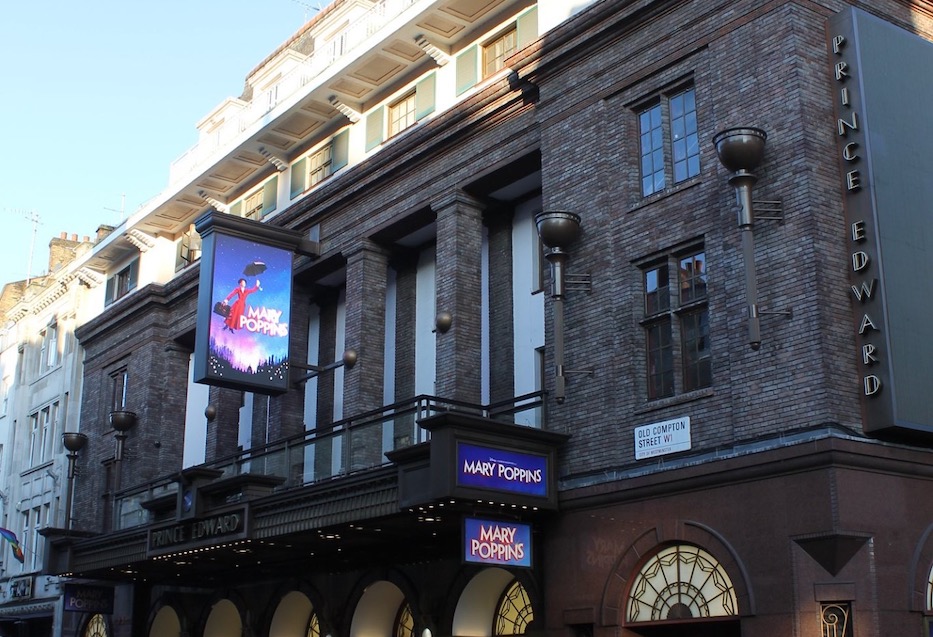 Externally, the Prince Edward Theatre bears a close resemblance to at least one of Edward A Stone’s cinemas, the former Streatham Astoria. Indeed, the two buildings were designed in the same year, 1929, but the interiors were very different. The Prince Edward was intended for musicals and revues, and had a high auditorium with balconies and seven conventional side-wall boxes. The designers of the interior, Marc-Henri & Laverdet, chose rectilinear patterns for the walls, and Rene Lalique ambro glass to frame the proscenium arch which has now gone.

The first musical, opening on 3 April 1930, was Rio Rita. It was not a success, and neither were those that followed. After the 1935 pantomime, Aladdin, the theatre was converted to the London Casino, reopening in Spring 1936 as a cabaret restaurant with a spectacular stage show. Stone was brought back to make the alterations. They included the installation of a velarium over the upper balcony, and a new apron stage for dancing linked by stairs to the balconies - where new stepped loges added at the sides at that time have subsequently become the principal novelty of the interior. A kitchen was installed under the old stage, the stalls lounge became a cocktail bar, and the upper foyers served as waiters’ rest rooms. With the outbreak of war in 1939 it closed, to be revamped again in 1942 as the Queensberry All Services Club by Thomas Braddock; he gave it a new velarium that re-exposed the upper circle and on-stage seating round a boxing ring.

In 1946 the Casino was restored to theatrical use by Thomas & Peter Braddock, and reopened in December with Mother Goose. For a time Ivor Novello’s Dancing Years and three editions of Robert Nesbitt’s revue Latin Quarter kept it going, but in 1954 it became a full time cinema, with the installation by the Braddocks of a deeply curved 19.5m (64ft) wide screen, stereophonic sound, and three synchronised projection boxes. The Casino was to mark a revolution in moving picture technology - Cinerama. For as long as films were available in this complicated tripartite format all was well, but the technique was not sustained. In 1974 the vast screen was removed, and in 1978 full-time theatrical use and the original name were restored, accompanied by the hit musical Evita. Chess and Anything Goes continued the success. A more thorough-going restoration and revitalisation followed in 1992/93, which has left the Prince Edward looking more impressive than ever. Adaptation by RHWL for Cameron Mackintosh has left one uncertain as to what is original and what new, for by successfully adopting Stone’s vocabulary, the auditorium is now more 1930s in style than it was before. New boxes and extra loges at the sides and the lowering of the anteproscenium arch have reduced the old impression of high, cold side walls, and openings have been made in the side of the stalls to allow continental-style seating without a central aisle. Restored laylights, new balcony lighting and a sympathetic colour scheme have made the auditorium glow. The circular entrance and basement bar have always been impressive spaces, and these have been restored and enhanced.