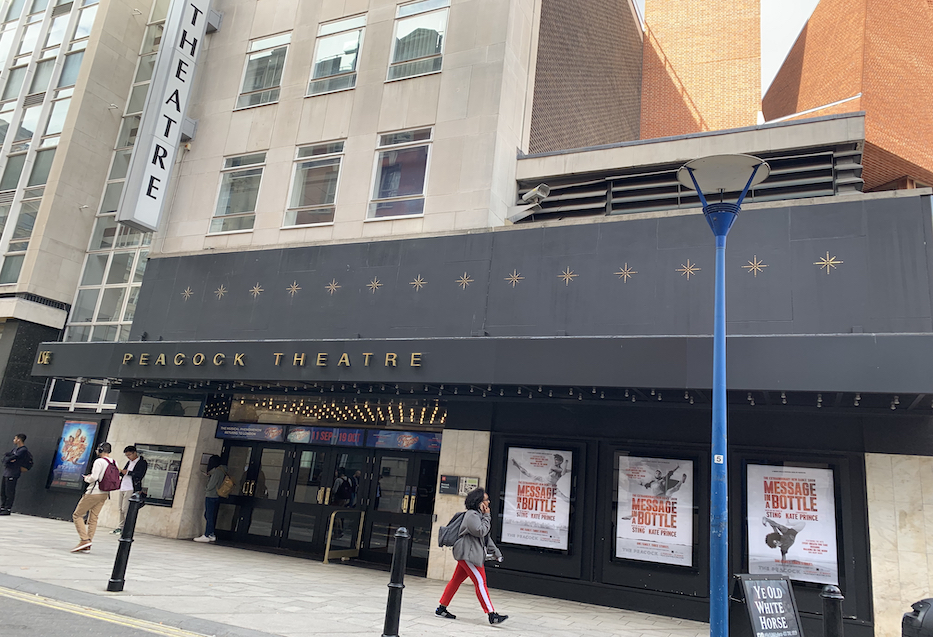 The Royalty Theatre was built in 1960 on the site of the London Opera House, otherwise known as the Stoll Theatre, a major part of the Kingsway street scene, which was demolished in August 1957. Consent for demolition contained the requirement that a smaller theatre be built to replace the Stoll’s 2,600 seats. The new theatre was built below ground, at the rear of an office block, with a side entrance in Portugal Street not readily visible from any of the neighbouring highways and standing some distance beyond the Drury Lane, Fortune, Duchess, Strand, Aldwych group of theatres. The London School of Economics and Political Science bought the theatre in 1996 for lectures, conferences, and open days. It was renamed the Peacock Theatre and leased to Sadler’s Wells for evening dance performances. The 1996 upgrade of facilities introduced substantial improvements. It is arguably the best dance stage in London with a seating capacity of just under 1000. The auditorium is on two levels and has good sightlines. The walls have vertical decorative panels which lead to a variable proscenium opening behind a large orchestra pit which is on a hydraulic lift, doubling as a forestage. The stage, with a total floor area of 110 square metres, is ideal for dance and is covered by a grid with 52 counterweight lines. Planning permission was granted in 2014 to architects Feix & Merlin for the refurbishment of the foyer and bar areas and to give the theatre's exterior more presence at street level. The theatre has changed ownership twice in 2015.