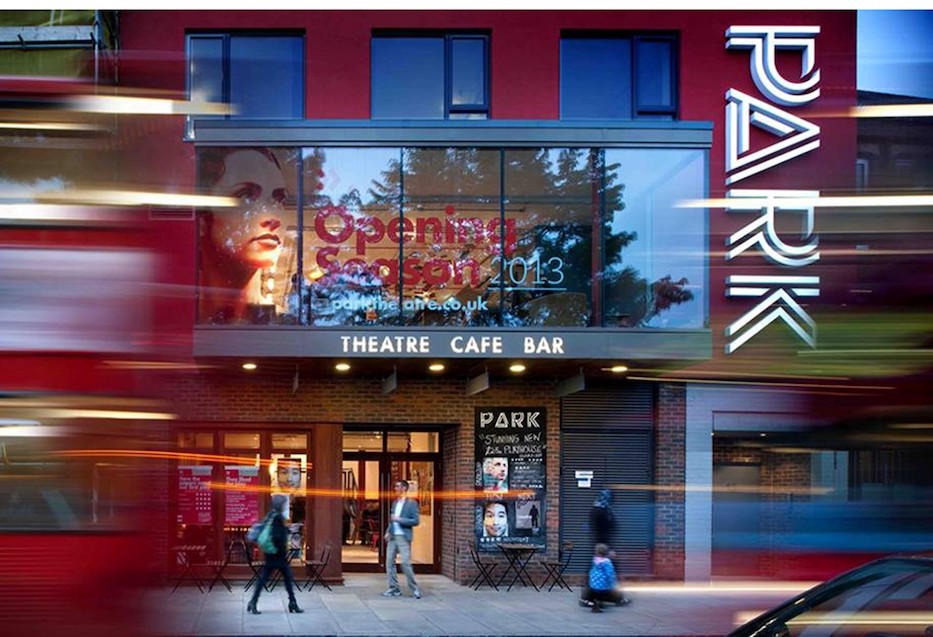 Opened in May 2013, the Park Theatre resulted from the conversion of a disused Sixties concrete office block next to Finsbury Park Station that had been the headquarters of a national charity. Original materials were exposed and kept where possible to show the historic fabric of the long thin building. The main auditorium, Park200, has a thrust configuration stage with two levels of seating, stalls and circle, for 200. There is a tension wire grid above the stage and programmable colour-changing LED house lighting that can transform the colour of the whole theatre space. Park90, the studio theatre, seats between 80 and 100 in a wide variety of flexible configurations – thrust, in the round, traverse, end on, or L shaped. The Park Theatre is the first theatre to use skylights in both auditoria to bring in natural daylight. These are blacked out for performances but allow rehearsal casts and technical staff to work in daylight, reducing energy costs. Ancillary facilities include dressing rooms, bathrooms, a second floor rehearsal space and storage. The interior is welcoming and friendly, with reclaimed furniture and refurbished theatre fittings such as seats from Watford Playhouse. Rooflights are used throughout for front of house areas and main circulation spaces. The dual level cafe-bar is connected to the atrium from which a large skylight floods the space with daylight. The first-floor bar is clad with more than 200 show programmes and hanging from the ceiling are old theatrical books from The British Drama League library. The bar front is made from the cut-down auditorium entrance doors from the demolished Wallsend Theatre, Tyne & Wear. The street frontage is extremely limited so a fully glazed bay window was created and regularly ‘dressed’ with graphics and projections to promote the theatre to passers-by.