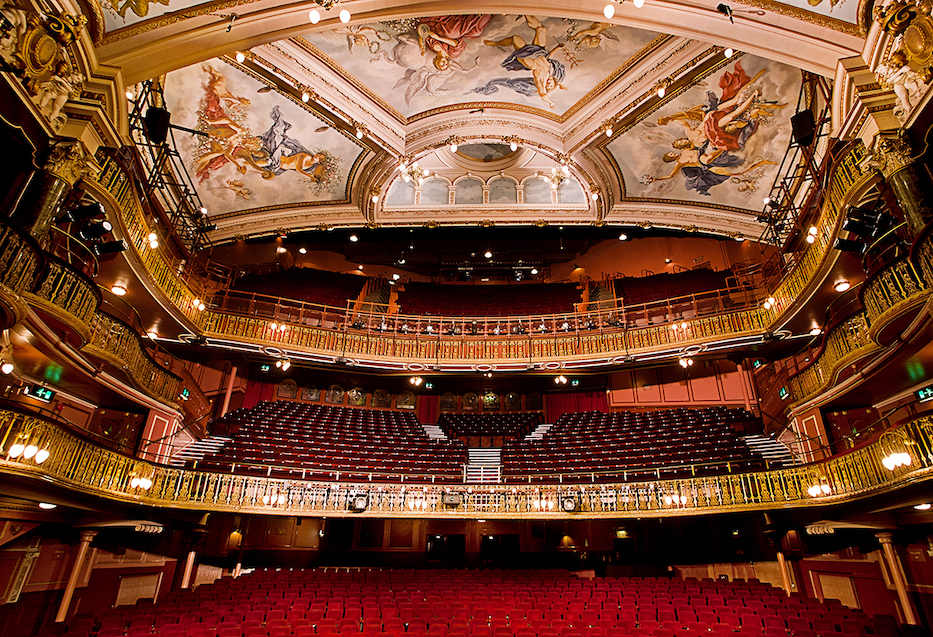 The Masey and Young theatre may possibly have been developed from a 1908 design by Frank H Jones. On a prominent corner site, it is a real landmark in Wimbledon. Brick and stone façade, the outer bays differently treated but both with open pediments over lunettes. Recessed concave corner containing a projecting entrance above which is an octagonal Baroque tower with dome, and prominent lantern topped by a globe and winged figure, the figure itself reinstated in early 1992 after wartime loss.

Good entrance foyer with Corinthian columns. The impressive and well-decorated three-balconied auditorium with iron balustraded fronts is of a type most unusual in Britain (compare in London only the Playhouse) but common in Spain and Portugal. Two tiers of bow-fronted boxes framed by giant marble Corinthian columns supporting entablature blocks and Baroque segmental broken pediments. Segmental proscenium arch set in a deep recess spanned by an arched sounding board. Boldly modelled reclining figures in the spandrel panels over. Shallow, semi-domed ceiling with painted allegorical panels.

Ill-advised alterations to the gallery tiering in 1991 resulted in massively over-prominent guard rails and terrible sightlines. There errors were corrected in the 1998 works which also involved the complete rebuilding of the dressing room block, major improvements to the stage, installation of a orchestra lift and other improvements.

Since 1994 the main house has also been supported by the 80-seat Studio Theatre - originally an Edwardian ballroom, it was later used as a dance school until its conversion to theatre use by Attic Theatre Company.