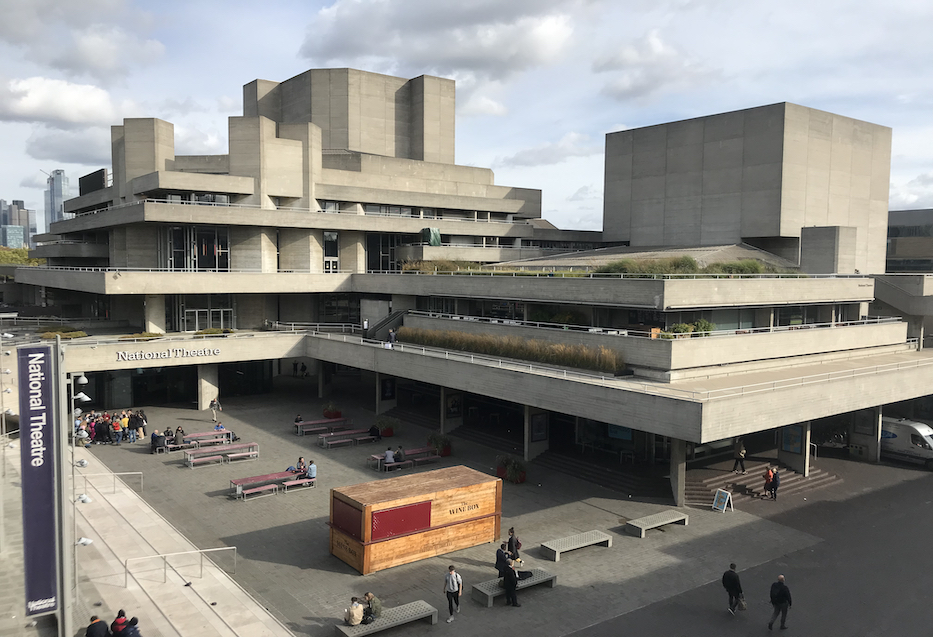 The idea of a national theatre had become a recurrent dream by the mid-nineteenth century, but the modern history of the movement for such a theatre started in 1903, when Harley Granville Barker and William Archer circulated detailed proposals supported by a budget. A Shakespeare Memorial National Theatre Committee, established in 1908, brought together the strengths of two separate campaigns to work toward this one objective.

A private members bill for the establishment of a National Theatre was passed by a small majority in 1913. By the late 1930s the committee had raised sufficient funds to buy a site (its second) opposite the Victoria and Albert Museum. Designs were prepared by the unlikely team of Sir Edwin Lutyens and Cecil Masey, but the Second World War intervened and the project had to be shelved.

After the war the National Theatre Act, which passed without division in 1949, established the principle of Government financial involvement. The South Kensington site was exchanged for a larger one on the South Bank and, in 1963, a National Theatre Company under Laurence Olivier occupied the Old Vic, with a view to taking over the new building when it was completed.

Denys Lasdun was appointed in 1963 as architect for the National Theatre and Opera House. In 1967 the present site was selected and, in the same year, the Opera House element was dropped, having received no Government support. Work on the National Theatre started in 1969; the Lyttelton and Olivier theatres opened in 1976 and the Cottesloe the following year.

The design process was, in some ways, reminiscent of that which produced the present Royal Shakespeare Theatre in Stratford-upon-Avon in 1932. In both cases an architect with little or no experience of theatre design was advised by a number of artists, directors and technical experts, few of them with any previous experience of a big building project and representing, between them, a wide diversity of views.

The resemblance, however, stopped there. The committee advising Lasdun undoubtedly represented the best theatre brains of the time and their discussions marked a crucial moment in modern theatre design. More significantly, Lasdun himself (unlike Elisabeth Scott at Stratford) was a powerful figure with determined views, ready to face down the arguments of others, including those of the first artistic director, Laurence Olivier. The final results have certainly not attracted universal approval in theatrical terms, but Lasdun should be given credit for successfully resisting the then fashionable idea of a big theatre of changeable format, adaptable to open stage, thrust or proscenium forms. The need for a separate proscenium space was accepted in late 1964.

The main house, the Olivier, evolved, step by step, from Lasdun's initial concept of a corner stage in a square room. As finally built it is extraordinary for having so large a volume for so small an audience. The auditorium is bigger than Drury Lane’s but has little more than half its capacity (1160 against 2230). Historically, its fan-shaped bowl with open stage, although arranged in two banks with raised side blocks, is reminiscent of a Greek theatre – but one built to accommodate at least three times the number.

Like every other space in the building, most visible surfaces in the Olivier are of board-faced concrete in highly disciplined geometrical forms and surface patterns. The side walls define a minimally accented proscenium opening, through which a mechanically complex drum revolve thrusts into the auditorium. This is the single most visible element in a highly technically sophisticated stage installation. There are three rear stage areas permitting a great range of scenic effects.

The second house, the Lyttelton, is a proscenium theatre but of distinctly non-traditional character, with flat side walls and seating arranged in long straight rows on two raked tiers. The proscenium arch is adjustable in width and there is an orchestra pit lift. The Lyttelton has been criticised for its lack of warmth, partly arising from the fact that the upper level audience is invisible to those on the lower level (and, of course, vice versa). Some temporary modifications were made in 2002 and more extensive remodelling may yet follow.

The Cottesloe was the smallest of the National’s three theatres and, but for pressure exerted by Peter Brook and later Peter Hall (Olivier’s successor), might easily have been omitted. It owed more in terms of inspiration to Iain Mackintosh and Theatre Projects Consultants than to Lasdun. It was, at the time, the second, but certainly the most influential of the modern ‘courtyard’ theatres, with something of the character of an urban barn fit-up. With its extremely simple, rectangular form and the audience on three shallow tiers, it could be readily adapted to proscenium, end stage, thrust, in-the-round, traverse or promenade form. The Cottesloe closed its doors on 23 February 2013 to undergo major refurbishment and reopened as the Dorfman Theatre on 30 September 2014 with new Pit seating elevators, two rows of seats in the balconies, relocation of the control rooms to the second balcony, new displacement ventilation, and improved sightlines. The Shed, a temporary venue made of raw steel and plywood, was built to provide a third 225-seat auditorium during the refurbishment.

Back of house facilities in the National complex and, in particular, the dressing rooms, were constrained by budgetary economies, but bear favourable comparison with most post-war theatres in Britain. The foyers and other public spaces are generous and well organised. Their modification and extension in 1998 was controversial, especially in respect of the enclosure of Lasdun’s original porte cochère. Recent refurbishment created a new bar, bookshop, The Sherling High-Level Walkway offering views into the theatre’s backstage workshops, and the Clore Learning Centre which opened in October 2014.

Externally, Lasdun’s pure geometry is expressed in a layering of continuous glass and concrete storey bands and balustraded terraces, above which rise the monumental, imperforate blocks of the fly towers.

This description can be no more than an outline. The National has attracted inordinate praise from architectural commentators, to the wonder of the theatre (and theatre technical) community, who see its shortcomings all too clearly. At the same time, it has been scornfully dismissed as an unspeakable concrete lump, to the despair of those who see it as the work of a great master. Time and sympathetic surgery may eventually calm the storm. When all has been said, the Royal National Theatre has established itself as an architectural icon of its time, enjoyed daily by thousands of theatre-lovers.