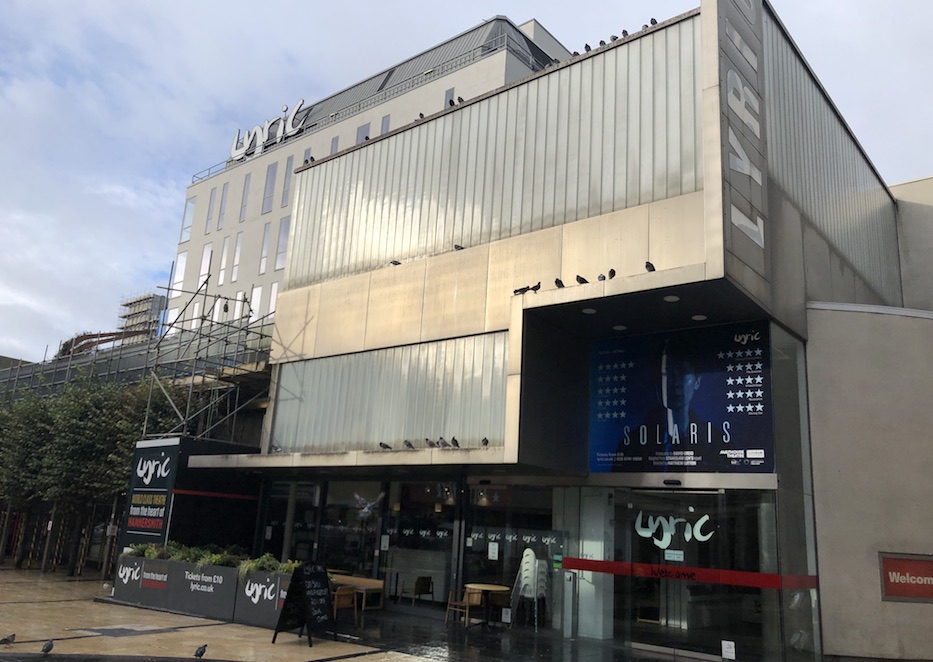 Matcham’s original Lyric Theatre was designed and built in 1895. Following a public inquiry in 1969, the theatre was demolished but key parts of the plasterwork were recorded, removed and stored. The auditorium was, after a long delay, reconstructed by the Borough Council in 1979 within a modern building, a typical concrete town centre block of the 1970s (which has since been re-clad and a two storey extension added, the new part of the building featuring a series of external fins). The discovery of a late Victorian Rococo theatre embedded within it, two storeys above ground, is one of the most bizarre architectural surprises that London has to offer. The new auditorium is still essentially Matcham’s beautiful 1895 design, modified in dimensions but adhering so closely to the original architectural vocabulary that only the keenest observer would be aware of the changes.

The widening of the proscenium by about 1.2m (4ft) necessitated an increase in the height as well as the span of the semi-circular arch, and this, in turn, led to changes in the height of the auditorium and the overall dimensions of the ceiling. The problems have been cleverly overcome by stretching Matcham’s design without obviously interfering with the proportions of the parts or introducing any new ornamental elements. Lighting positions and ventilation inlets above the ceiling have been accommodated by introducing mesh in place of the flat plaster ceiling bed, the paintings on which had been lost in the 1920s.

This is a splendid interior with a wealth of lively Rococo ornament (one of the very few for which an original Matcham sketch exists). It has two balconies. The proscenium has a round arch enriched with leaf scrolls in the architrave and a fantastic openwork valence made of repeating scrolly elements. The ceiling is boldly coved. There is now a forestage elevator with three positions (forestage, orchestra pit or additional seating) carefully planned into the old plasterwork details.

In 2004 a new entrance was constructed on to Lyric Square, featuring internally illuminated glass walls and a sign bearing the theatre’s name, a new box office and a café. This greatly improved the theatre’s street presence.

In 2012 the Lyric embarked on a project to construct a new two story wing to the west of the theatre with studio facilities for training young people, a 60 seat cinema and a new café and bar. The Reuben Foundation Wing opened in April 2015.