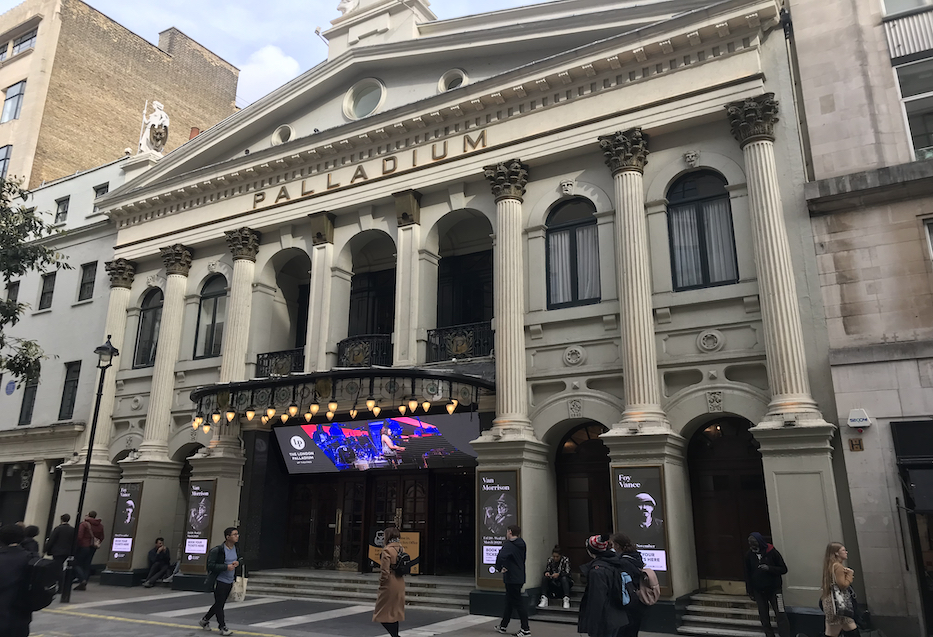 On the site of the eighteenth century Argyll House, the London Palladium is the successor to the Corinthian Bazaar of 1868 and Hengler’s Circus of 1871. It was built by Walter Gibbons in 1910 as a palatial variety theatre to rival the London Coliseum, the Hippodrome, the Palace Music Hall and the Lyceum (during that theatre’s short music hall life). The façade, modified and with lively sculpture added by Matcham, is a striking relic of the old Corinthian Bazaar, a painted stone classical temple front with Corinthian columns on tall pedestals.

The booking hall, which has its own separate entrance (formerly a passageway through to Haig’s wine merchants building, now incorporated in the Palladium complex), is as big as a branch post office. Also now linked to the theatre is the adjoining, altered Georgian house, No 8 Argyll Street.

Foyers and bars are generous with most of the original ornament intact. The grand staircase and Cinderella Bar, in particular, have recently been magnificently restored to Matcham’s original detailed designs. Big, but remarkably intimate auditorium, wider than it is deep, a late and magnificent creation of the variety palace boom. Elaborate ceiling with laterally elongated dome. Two balconies spanning the auditorium with no intermediate support. Boxes at three levels in paired arched niches. Fine proscenium arch. The style was described as ‘French Rococo’ but the ornaments are variously derived and freely juxtaposed in a piece of bold Matcham mannerism.

Some basic fabric to the left of and behind the main façade and also backstage was incorporated from earlier buildings, a typical theatre-builder’s procedure for time-saving rather than cost reduction.

Of the select company of giant variety houses built in the West End in the decade before the Great War, the Palladium has the most complex building history. The way in which Matcham adopted earlier fabric, turning Owen Lewis’s front into one of the most remarkable theatre façades of its time, demonstrates architectural skill of a high order. The Palladium is one of the finest surviving examples of his later work.