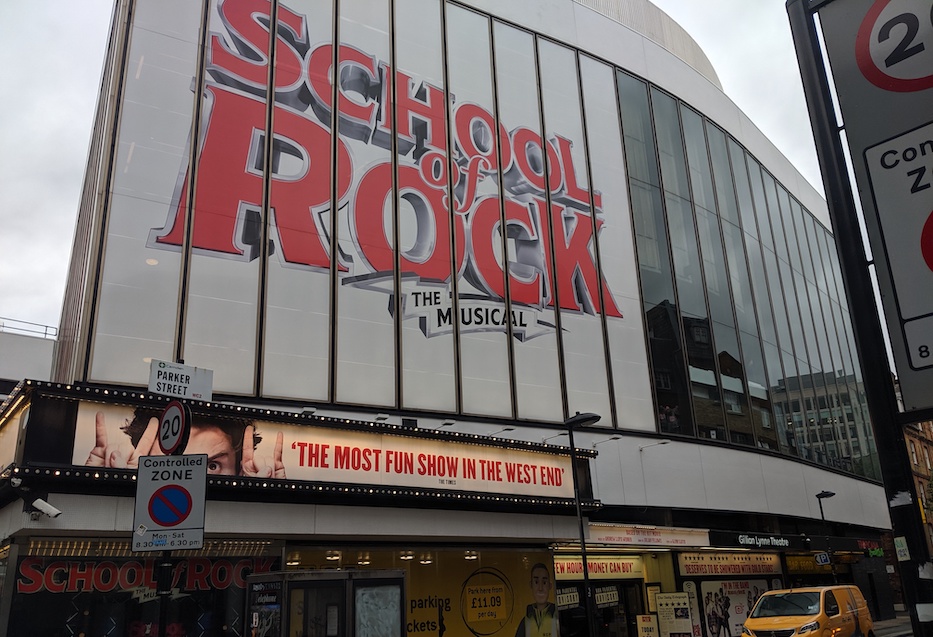 The New London Theatre was built on a site which had vocal entertainments at the Old Mogul Tavern as early as 1828. This was succeeded by the Middlesex Music Hall in 1851 and the New Middlesex Theatre of Varieties (later known as the Winter Garden) in 1911. (See Theatres Database ID 1528). In 1959 the old theatre, by Frank Matcham, was closed and more than a decade later a major development of shops, showrooms, flats, car park, cabaret restaurant and theatre was built. Externally the theatre is encased by an impressive glass curtain wall. The entrance to auditorium is reached by escalator, stairs and bridges via the foyers which together create an architecturally dramatic concrete and wood 'brutalist' composition.
The auditorium is loosely based on Walter Gropius's Total Theatre Project of 1927. It is a theatre that moves; seats, stage, lights and walls are all flexible so that proscenium or in-the-round productions can be presented. Almost all of the theatre's floor is built on a revolve 60ft across which accommodates the stage, orchestra pit and the first eight rows comprising 206 of the 1102 seats. These seats can also be raised by electrically operated screwjacks to a steeper angle for raking. The walls on more than half the theatre are faced with moveable panels extending from floor to ceiling which can be made to pivot and track in such a way that the shape of the auditorium can be drastically altered. The revolve can turn not only the stage but the first 8 rows of seats through 180 degrees in 4 minutes to create a theatre in the round. The ceiling is composed of dramatic louvered panels which are opened to allow lights to project through and for scenery to be lowered. Everything on the main revolve is moveable. Within the main revolve there is a smaller stage revolve and set of traps which can be reached from below. The proscenium is flexible with a maximum 45ft opening and an additional 25ft at either side. There is a warm, intimate relationship between stage and audience.The New London was an ideal home for 'Cats', which ran there for 21 years. The unusual nature of the theatre provides the potential for shows that are specially designed for it to fully exploit its technical sophistication and flexibility. The situation of the theatre within a larger development is not ideal in some respects: the get-in shares an entrance with the car park for residential units and there is difficulty in upgrading the theatre to accommodate a passenger lift front-of-house. However, it was constructed as a separate entity. The New London is an important building in the history of stage design and survives intact. Given its significance, it remains surprisingly undesignated, and one which also given its Covent Garden location, should be more highly prized.

The venue made history in May 2018 when it formally changed its name from the New London to the Gillian Lynne Theatre, becoming the first West End theatre to be named after a woman in order to celebrate the life and work of a groundbreaking choreographer, visionary director and a true musical theatre great.