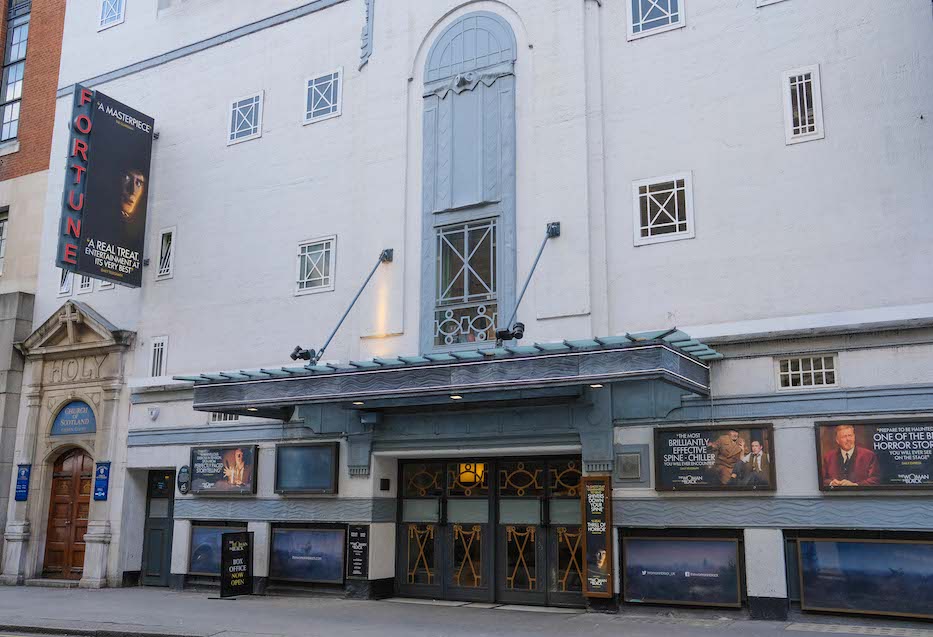 Evaluation of twentieth century theatres has been greatly hampered over the years by the kind of determinism which leads historians to judge buildings by how well they accord with a received view of what ‘good’ architects should have been doing at the time. Having regard to the generally dismal showing of mainstream architects in designing workable theatres, judgements need to be made on a rather more informed basis. The Fortune is not one of the great theatres of the century but it is, in a number of ways, notable. It was the first completely new theatre to be built in the West End after the Great War (immediately before a surge in the building of big cinemas) and it represents, at least in London, a sudden and radical departure from the style set by the turn of the century ‘boom’ theatres of the Matcham school. The contrast with Sprague’s St Martin’s of 1916, or Emblin Walker, Jones & Cromie’s new Drury Lane auditorium of 1922, could not be more striking. Externally and internally it breaks completely with established theatre design norms.

Although it is one of the West End’s smallest houses, the three-dimensional design ingenuity required to fit such a theatre, meeting all the safety requirements, on such a site was considerable. In this respect (but no other) it invites comparison with the neighbouring Duchess. The Fortune, however, is more innovatory, making extensive use of reinforced concrete construction and presenting frankly cubist forms (curiously described as ‘mediaeval’ by a contemporary commentator) to the outside world. The original appearance of hard textured walls, minimally relieved by ornamental lead strips, has been blurred by over-painting, but the entrance front and doors are almost intact. The gilt nude female figure of Fortune (wrongly identified as Terpsichore) is a striking feature, high up on the façade. Internally, the marble and copper ornament in the foyer is original. The two-balconied auditorium, the first in London to make a merit of abandoning stage boxes and curving balcony fronts, has had its original mural decorations painted out. The balcony rows are, inevitably, rather tightly set, but more difficult space problems had to be met backstage. The stage itself, 7.9m (26ft) deep, is extremely restricted.