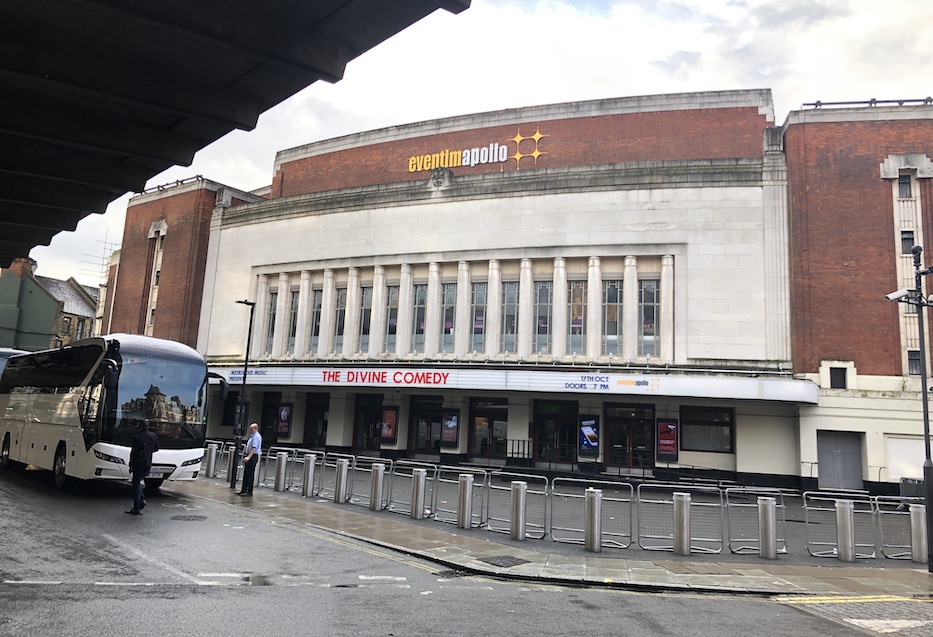 The Gaumont Palace, Hammersmith, which assumed its present name in 1999, opened in 1932. It was originally commissioned for the Davis Company, which explains why the architect was Robert Cromie, who had designed their massive Davis Cinema in Croydon (1928). However, the scheme was taken over by Gaumont in 1930, before construction began. The cinema's preservation as a single auditorium, complete with full stalls seating, has been due to its use as a live venue for pop concerts since the 1960s, and this has evolved under Apollo’s management into its refurbishment as a full-time theatre. The stage has been extended over the organ (which has been in store since 1996) and the orchestra pit. A bar has been inserted into the curved tea room that ran over the entrance to the building, blocking the first-floor windows, and some light fittings were taken in about 1980 to the State Cinema in Grays, Thurrock, but the building is otherwise completely intact.

The exterior has always been noted for its tremendous width of 57.9m (190ft), served by nine pairs of double doors. This width is the secret to its very logical plan, excellent sight lines and ease of circulation. Foyers run on two levels along the full width of this front, with staircases at either end, and give directly on to the auditorium. The tremendous width of the circle is also the cause of the massive capacity. It is 51.8m (170ft) wide at the rear, and achieves its high capacity without overhanging the stalls by more than a dozen rows. The largest steel girder across the balcony front weighs 56 tons, yet the building was noted for its economical use of steel by combining steel framing with load-bearing brick. Apollo report that its great structural strength has enabled exceptionally heavy sets and gantries to be installed successfully. The stage has a 19.21m (63ft) proscenium and a depth of 9.41m (31ft).

The art-deco mouldings of the shallow aedicules on the walls are typical of Cromie's work, and are repeated at his Regal Cinema, Kingston; but other elements of the design are typical of the Gaumont circuit, especially the use of deep ceiling coves and the murals by Newbury A Trent in the entrance hall. There are some good light fittings in the auditorium and on the staircases. Other unusual features are the way in which the projection box is concealed behind the deep elliptical skylight above the circle, 12.2m (40ft) in advance of the back of the auditorium (another Gaumont conceit), and the positioning of the organ chamber above the stage. Organ chambers were sometimes placed below the stage in Britain, but their positioning above it is very rare, and allows no space for an elaborate proscenium arch. Instead the effect of a decorative proscenium was given by curtains (long gone), which repeated the aediculed motifs of the surrounding walls. The curved upper foyer, reached by an imperial staircase to each side, is a particularly strong architectural space, with a line of columns that formerly separated it from the tea room to one side and a central lightwell that corresponds with a deeply coved ceiling above.

Robert Cromie worked for Bertie Crewe between 1910 and 1914 and so had an excellent training in theatre planning. The demolition of the Davis in 1959 has left the Apollo as his finest surviving work. In a special issue of Architectural Design and Construction, published in March 1938, Cromie wrote that cinemas had a special place in society because they were 'very human milestones in our domestic history - temples to the passing hour - to Peace, not merely to prosperity.

'Of all buildings none are more fascinating to design, more difficult to construct nor more unsatisfying when built. The architect’s job is so much of a struggle to squeeze a quart into a pint, a week into a day, to make a hundred pounds produce a lot. But there is no reason why cinema building should not present in plan and form something of the comfortable elegance and repose of our best domestic work.'

In 2013 the venue received a £5m refurbishment which restored the original colour scheme and uncovered many hidden architectural features.