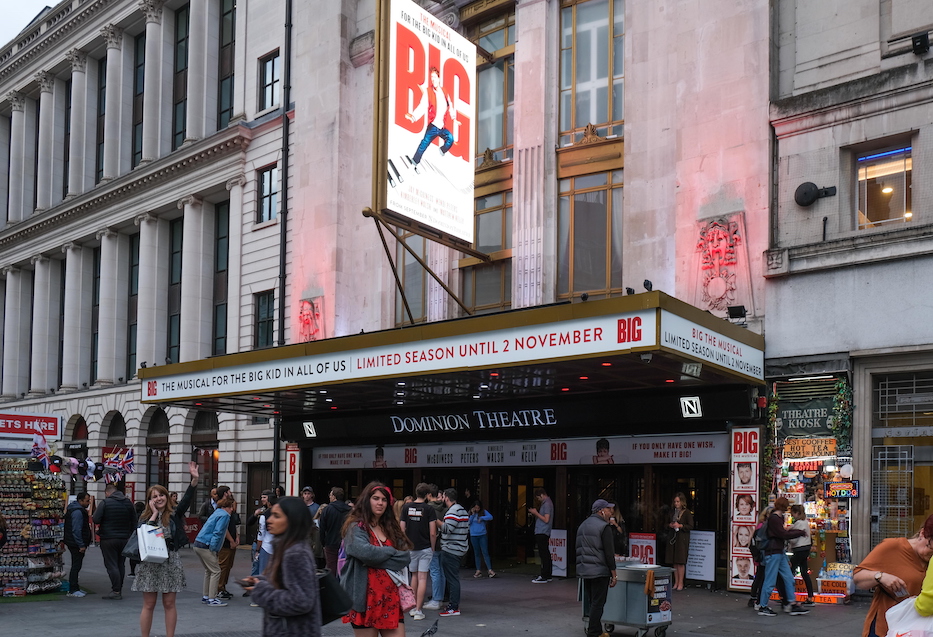 The Dominion was built on the site of the Meux Brewery and the tiny Court Cinema opened in 1911. Proposals for a theatre there were first made in 1923, but it was only in 1928 that Moss Empires became interested in development. The result is typical of the work of the younger William Milburn. The Dominion is vast, yet distances from the stage are never great (save in the upper circle) and the sight-lines are excellent. The foyer and circle circulation areas are also remarkably generous for a London theatre, and there was originally also a café over the entrance. The style, however was the rather frigid neo-Renaissance of the 1920s Milburn houses; despite its original pink lampshades, the auditorium must always have been a cold, impersonal place best suited to large-scale extravaganzas. Its recent redecoration in dark colours suits it well.

It was not one of Moss Empires’ successful ventures. A musical based on golf opened the theatre, but within a year it was being rented to film distributors. From September 1930 it became a permanent cinema, with W R Glen employed to strip out the cloakrooms and bars to expand the ‘crush’ areas to cinematic requirements. In January 1933 the building was sold to Gaumont British. Further alterations were made after the Second World War, when shortage of office space forced Gaumont, from 1940 part of the Rank empire, to convert the old café, carpenter’s shop and the upper floors of dressing rooms into offices. Then in 1958 a vast Todd AO cinema screen was installed, along with a new projection box, and the upper circle was closed.

From November 1981 the Dominion became primarily a venue for one-off live shows; then, in 1986, it was painted black and hung with a velarium for Time. A legal dispute ensured the theatre was not subsequently restored, and Rank took the opportunity to seek the site’s redevelopment. Only in 1990 was demolition for a hotel averted, when the building was acquired by Apollo Leisure and listed. It is interesting that no other London theatre has an empty upper circle stepped to modern standards.

The Dominium was refurbished and restored by Nederlander in 2014. The refurbishment included a new 56 bar counterweight system, hospitality suites and reinstating the Orchestra Pit. The refurbishment also included new carpets, reupholstering of all the seats, new lighting fixtures, new handrails, new toilets and upgrading the box office. An extensive restoration was undertaken including regilding the proscenium and ante- proscenium, restoring previously boarded up arches and the reinstatement of a huge ornate stone depicting two griffins which was once positioned above the entrance windows.