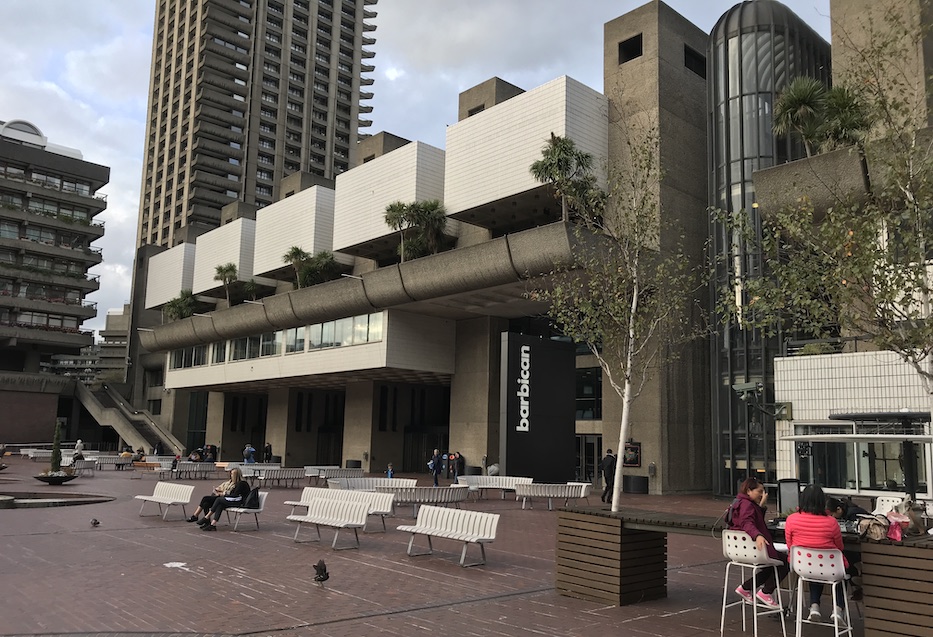 London’s two great post-war theatres present very different public faces. The first in point of time, the Royal National, is planted firmly on the ground, an architectural statement of considerable force in both near and distant views. The Barbican has no obvious external presence, being embedded in an arts centre within a huge residential development whose decks and elevated walkways bear little visible relationship with the pre-existing geography. The National is a landmark in every sense, stamped with the creative persona of its architect and still capable, after decades, of generating heated differences of opinion. The Barbican hides its face and, when discovered, it impresses first and last as a working theatre. Neither its authorship, nor the debates that shaped its design have so far provoked much public discussion.

The history of the Barbican development cannot be discussed at length here but neither can it be ignored, since the setting of the theatre has been an important influence on its design. The vast, bomb-flattened area on the northern edge of the City was developed in two stages: Golden Lane from 1953 to 63 and Barbican from 1962 to 82, both of them to the designs of Chamberlin, Powell & Bon, and both of marked significance in architectural, town planning and social terms.

The theatre and the concert hall at the Barbican, although first proposed in 1959, were late arrivals, finally opening in 1982. The Pit Studio (decided upon when theatre planning was already advanced) and two cinemas, completed a group of auditoria of not less than national significance. The two principal spaces were intended at first as relatively small elements within the new Guildhall School of Music, but the decision was taken in 1964 to build them on a much larger scale, with the Royal Shakespeare Company and the London Symphony Orchestra in view as tenants. The change imposed considerable strain (still evident) on a pre-existing plan.

The team of Chamberlin Powell & Bon (John Honer and John Connaughton), first with Richard Southern as theatre consultant and later with Peter Hall, John Bury and other advisors, produced a remarkable result. No theatre design has ever pleased every critic. Some actors and theatregoers have certainly found this one, in some ways, less than perfect, but the Barbican is something of a rarity in having attracted consistent praise from both architectural commentators and theatre experts. Victor Glasstone described it in 1982 as "the finest medium-sized house to be built in Britain since the war and, by international standards, one of the greats".

To quote Glasstone further: "The auditorium is a brilliant re-evaluation of the traditional balconied theatre – ‘stacking them up in layers’, ‘papering the walls with people’, etc – yet facing what is essentially an end stage with the additional advantage of a proscenium opening to an inner stage… Nothing of the complexity of the old has been lost. This is no simplistic solution with everything sacrificed to good sightlines and comfort. There is no irrelevant polemic about ‘egalitarianism’ and Greek amphitheatres; instead, a frank enjoyment of the possibilities of poising the audience at many levels… The theatre itself is theatrically timeless."

The auditorium is fan-shaped, with three shallow balconies and raking side slips over a steeply raked stalls. At the ends of each row of seats a section of side wall opens as a door to serve that row alone. The doors are held open magnetically before the show and during intervals, revealing the whole auditorium and permitting free audience movement in and out. Walls and doors are walnut lined; balcony fronts are bush-hammered concrete with exposed black aggregate. The stage is technically well equipped with a large acting area, a forestage and ample wing space, providing for a variety of styles of presentation. A new grid and flying system was added following a grant from the City of London in 2013. A stainless steel safety curtain rises from below.

The best way to arrive at and leave the theatre is by cab. Approaching on foot from the nearest underground stations or bus stops requires familiarity with the pedestrian routes or a firm will to follow direction signs rather than one’s instincts. Leaving on foot at night can also be dispiriting, since the surroundings lack the hubbub and variety of the streets of Theatreland farther West. First-time visitors also often find the internal circulation at the Barbican confusing and difficult to navigate. Determined theatregoers, having found the shortest routes to the toilets and bars, soon learn to treat the entire arts complex as a giant foyer to its most satisfying single element, the theatre.