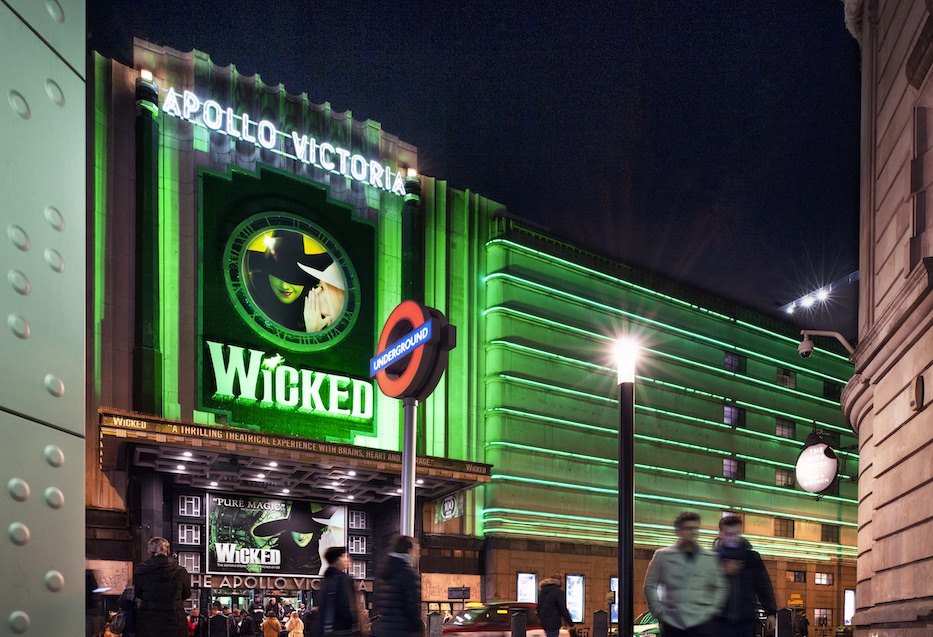 The New Victoria was the first cinema to adopt the Germanic expressionist style, an equivalent of the Savoy Theatre but on a more prominent site. It has been rightly identified by Richard Gray (op. cit. 1996) as ‘a revolutionary design [which] introduced modernism to Britain in a popular form. The Europhile critic, P Morton Shand, captioned the ‘stop press’ frontispiece of his ‘Modern Theatres and Cinemas’ (1930), calling it ‘a symbol of hope’ for the future.

The site was tightly confined between two parallel major streets, which were given almost identical façades, ribbed like a radio set and originally with long, low canopies to shelter the queues as well as the present high ones over the once elaborately lacquered doors. The use of colour was, like the mouldings, carefully controlled, with neon strips intended to be co-ordinated into the overall streamlining. Witty reliefs of cinema audiences by Newberry A Trent entertained the queue.

The plan was ingeniously contrived to create a maximum of space by extending the stalls area under the pavement and putting the lavatories and foyers in a mezzanine between the stalls and rear circle. The stage was rather cramped in depth, designed for a ciné theatre, but large stage shows were dropped within a month of opening. Live acts and big bands, however, played here throughout the 1930s.

The novelty of the design came out of E Wamsley Lewis’s study of the work of European architects and his working for a time with American theatre architects like Joseph Urban. It is clear from the drawings that the design is entirely his, with W E Trent acting as the executant who produced the finished drawings to satisfy the London County Council’s committees. What is more extraordinary than the planning or even the sophisticated façades is the interior. A strong Wrightian sympathy, with bright rubber floors and rich mouldings continued through the large entrance lobby and small circle foyer. A fine relief of a female figure by Newberry A Trent hovers over the stairs. The auditorium, which Lewis said was inspired by Poelzig’s 1919 Berlin Grosses Schauspielhaus, is an oceanic outburst of suspended scallops around a giant dome, originally all bathed in changing blue, green and pink lights. Lewis said that he conceived the underwater ‘Mermaid’s Palace’ theme on a whim to satisfy PCT’s Managing Director’s love of boats.

The New Victoria’s vast size and non-West End location made it an early target for adaptation once cinema audiences began to decline in the 1950s. Its stage was its salvation. In 1958 the installation and dressing rooms were overhauled and live shows and ballet supplemented the film fare. In 1980 the building was leased to Apollo Leisure (later Clear Channel), who first upgraded the shows and then in 1984 brought in Starlight Express. The Lloyd-Webber extravaganza ensured the financial viability of the venue, but the physical price for the interior was high. The future of the building clearly lies at present with big musical productions, with all the risks that this may imply for such an outstandingly important and vulnerable interior. Nevertheless, the first steps were taken in 2002 to return the auditorium to something resembling its original appearance and this process seems likely to continue. The opportunity may also arise to regain the colourful Art Deco treatments of the foyer and staircases, which were obscured by a radical redecoration in 1980.

Whatever problems may remain to be overcome, this is one cinema (arguably the most important ever built in Britain) that has found a successful second life in theatrical use, in appreciative hands.