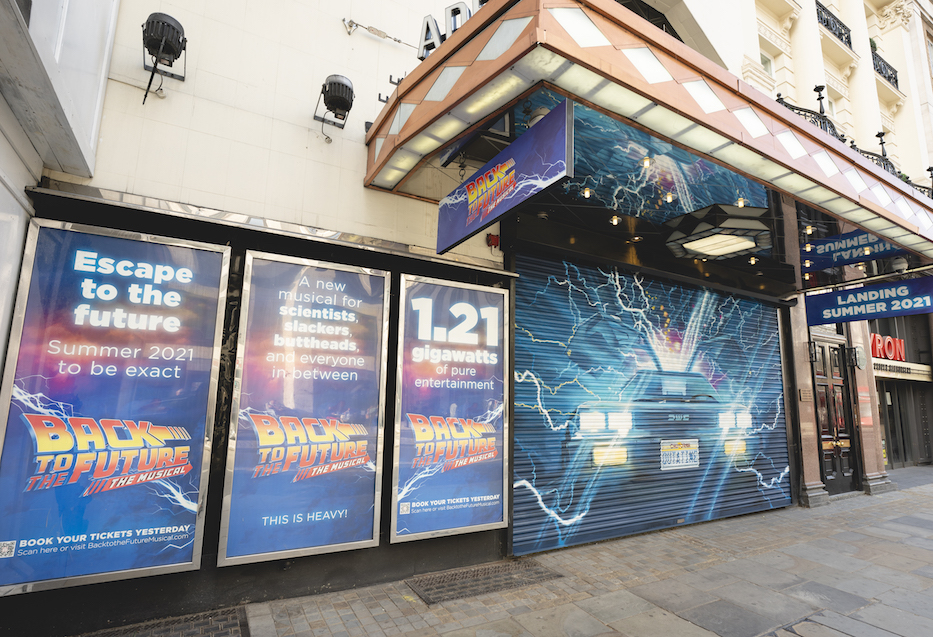 The Adelphi is an extraordinary complex of many periods. Although most of what is observed by the public dates from 1930 or later, the building incorporates the rear elevation, flank walls and roof construction of much earlier theatres. Nothing now remains of the Sans Pareil of 1806, the Beazley façade of 1840 or the auditoria of 1848 (M D Wyatt), 1858 (T H Wyatt) or 1900 (Runtz & Ford). The Royal entrance in Maiden Lane is probably of 1868-9, a surviving alteration by Joseph Lavender to the 1858 theatre. The remainder of this frontage is probably of 1882 (? by Chadwick). Part of Chadwick’s classical façade of 1887 (once the Adelphi Restaurant) can be seen in the Strand alongside the theatre, but no longer forming part of it, where it makes an interesting contrast with Schaufelberg’s geometric 1930 front.

Given the Adelphi’s record of successive reincarnations, the many-windowed, somewhat domestic Maiden Lane elevation is a remarkable survival. The Royal entrance, close to the door where William Terriss was murdered in 1897, adjoined the site of the notorious Cyder Cellars concert room, a proto-music hall rebuilt in the 1840s, later used as a rehearsal room by Diaghilev. The Strand façade, interfered with by Bennett in 1937 and later obliterated by signage, has been restored by Jaques Muir & Partners (1993) to a form closer to Schaufelberg’s 1930 design. Described in their time as ‘bizarre and opulent’, the Schaufelberg interiors are now perceived to be of considerable interest as good, if low-key, examples of a new design philosophy (presently lumped with much contemporary work as ‘Art Deco’). The sensitive 1993 restorations were accompanied by quite extensive new works which successfully picked up the Schaufelberg decorative vocabulary with its ordered geometrical black, mirror glass and chromium plate forms and the warm veneered surfaces in the auditorium. The incorporation of modern equipment has been achieved without damaging the original design concept. Within the stage house and the orchestra pit, radical reconstruction was necessary in 1993 to accommodate a technically highly complex production. The last fragments of the 1930s revolve were removed at this time.